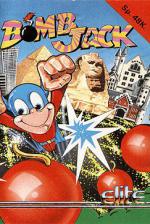 Bomb Jack is the second game to come out of Elite's licensing deal with coin-op manufacturer and attempts to follow the success of Commando.

The object of Bomb Jack is simple, as in all the best games, and consists of collecting bombs by leaping around platforms set on a number of backgrounds.

Although our hero can leap great heights and can even control the direction of his jump and resulting plummet, he can't fly. He can, however, quite successfully leap between the screen's platforms collecting bombs as he goes. However, sooner or later you will get too ambitious with your aerobatics and fall on one of the many nasties that patrol the screen hoping to steal one of your three lives.

As each screen begins, the threat is quite small and only comes from a giant bird roaming around and one or two robots. But then things quickly get worse.

First more robots appear but then they move down the screen by dropping from one platform to another until they reach the bottom when they mutate into giant balls, flying snails and extremely fast spacecraft.

To help you with this mounting pressure P, B and E symbols occasionally drop from the top of the screen. Touching them will earn you either a Bonus score, Extra life or Pause the nasties. This freezes them for a few moments and allows you to kill them. You haven't got much time so you should take out those that have already mutated. They will be replaced but it will give you a chance to clear the bombs and get onto the next screen.

As you progress through the screens, there are less and less platforms which makes things harder and harder as there's nowhere for you to stand and the robots mutate almost immediately.

If you like your action fast and furious then you'll like Bomb Jack, but don't expect too much to think about.

If you like your action fast and furious then you'll like Bomb Jack, but don't expect too much to think about.