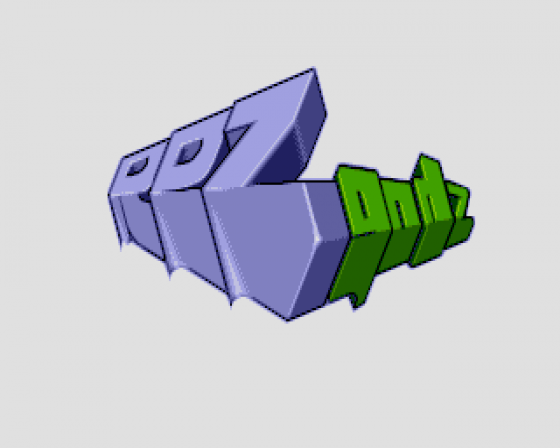 An Atari ST Sudoku game featuring the surreal cast from The Mighty Boosh? It can mean only one thing - the Gods are back! Despite being coded in STOS, Reservoir Gods' pixel artist SH3's debut game is more that worthy of using the old group handle.

There's no doubting the fact that the Resevoir Gods have been sorely missed by the Atari scene over the past few years. Undisputed kings of Atari homebrew game-development, their previous releases include an impressive unofficial 16-bit port of Chu-Chu Rocket, a super-colourful Falcon-only remix of Bubble Bobble (Double Bobble 2000), their vegetable-fuelled re-imagining of the Bandai Wonderswan's classic GunPey (GodPey) and of course, the maddeningly addictive SuperFly. Sadly, mortgages, day-jobs, relationships and other real-life issues have taken their toll on the group, with development of their various 'active' projects slowly grinding to down to a near-halt. Their much-anticipated Bust-a-Move clone (Faerytale Adventures) hasn't progressed past the stage of being a playable (yet very promising) unreleased alpha version for years, and there has been no news posted on their website since the release of their last official game back in 2005. However, it's not all doom and gloom; frustrated with the lack of activity within the group, God's pixel artist and all-round nice chap SH3 recently picked up a STOS manual and began coding away on his own - and the unexpectedly brilliant Sudokuniverse is the fruit of his labour.

Sudoku isn't a game for everyone, and I have to confess that until loading up Sudokuniverse I had previously avoided playing the logical puzzler in both its paper and electronic incarnations. As such, I was ignorant to the game rules, so the first stop for me was to read through the incredibly helpful and illustrated in-game tutorial. For the uninitiated, although it is a number puzzle, Sudoku involves no mathematics and is best described as a very basic 'fill the missing gaps' logical conundrum. The board is made up of nine 3x3 grids, each of which must include the numbers one through to nine. Each horizontal and vertical line across the board must also include the numbers one to nine, the aim of the game being to fill the missing digits in the boxes within these constraints. It's equally simple and addictive, and after playing Sudokuniverse for what must be hours I can see why the game is so universally popular.

As with all Reservoir Gods releases, Sudokuniverse has had a healthy dose of originality and humour pumped into it - this time in the form of a surreal plot featuring the cast of BBC cult favourite The Mighty Boosh, transforming what would otherwise be a solid yet pedestrian title into something really quite special. The story, written in authentic Boosh style, sees the player take the part of Bob Fossil in his quest to return order to the Sudokuniverse; a vast blue desert of disordered logic problems sparsely populated by various forms of life (and life forms of various types). Throughout your mission to complete the game's 51 stages you'll meet many characters from the series via animated cut-scenes, and in true God's style, rumour has it that there's a special surprise awaiting the brave and determined player who succeeds in completing the final puzzle... 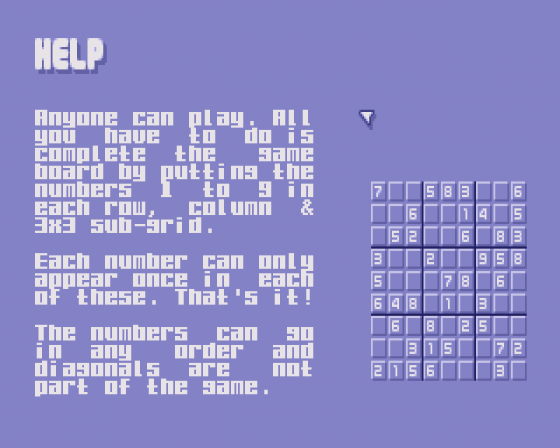 Ok, so aside from the wacked-out plot and predictably stylish visuals, what else does Sudokuniverse have going for it? For starters the game maintains the high-standard production values you'd expect from a Gods release (Sudokuniverse features a cute fake-'cracktro', comprehensive tutorial, documentation and well-designed GUI), but it also has some innovative yet common-sense design features that will cause other Sudoku game coders to ask themselves "why didn't I think of that?". Most notable of these is the excellent pencil mark system whereby you can eliminate/highlight numerical contenders for boxes that could have more than one possible value, but the equally helpful tile-highlighter also gets both thumbs up from us at RGCD towers for making it easy to visualise the numbers already used in each grid and axis. The soundtrack is well composed (although the actual in-game 'music' is a little repetitive) and progress through the game is helpfully saved automatically to disk (as is the time taken for each puzzle). There's even an 'exit to desktop' option on the main menu - which should save the player from having to use the reset button, but...

...the game (at least the build reviewed here) is bugged. After every ten levels the player is presented with a neat little story cut-scene, after which the game hangs and refuses to move on to the next puzzle. As already mentioned, the Sudokuniverse keeps a record of the levels you've already completed, so thankfully this problem isn't fatal as the bug can be bypassed by a quick reset and re-load, but the review score reflects this issue nonetheless (sorry Kev!). Another (minor) niggle is the lack of keyboard support - really this game should be playable via cursors and the 0-9 keys (with shift+number to switch on and off the pencil marks) instead of being solely mouse-controlled, as dragging the old ST mouse about continuously across the screen does prove to be a little tiresome. However, as this is still the initial Outline release there's always the chance that these issues will be fixed in the future.

As a debut game release, SH3 should be applauded for his work on Sudokuniverse. Not only has he managed to develop the first proper, and intelligently designed, Atari ST Sudoku game, but he's also succeeded in giving the otherwise unexciting puzzler some much needed humour and style.

(Since writing this review SH3 has compiled an exclusive bug-fixed version especially for RGCD! Thanks Kev!)

The first proper and intelligently designed Atari ST Sudoku game... and also gives the otherwise unexciting puzzler some much needed humour and style. 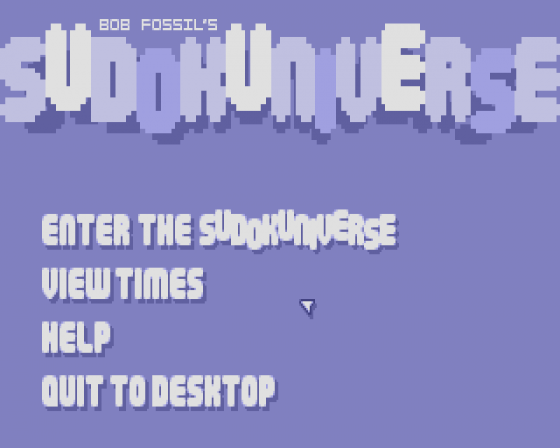 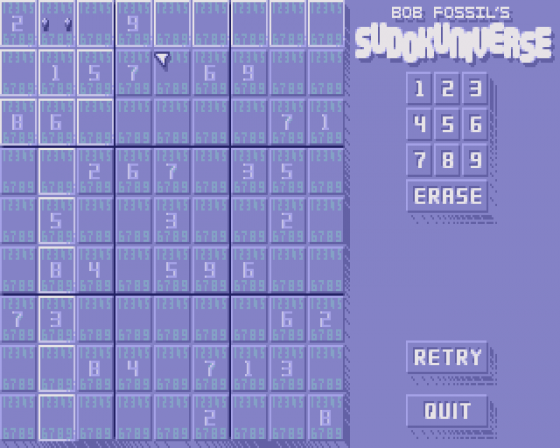 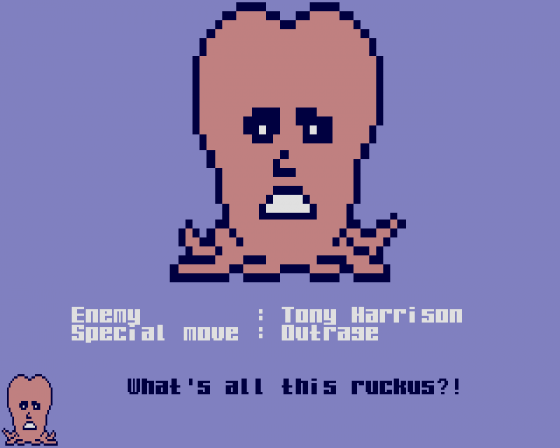 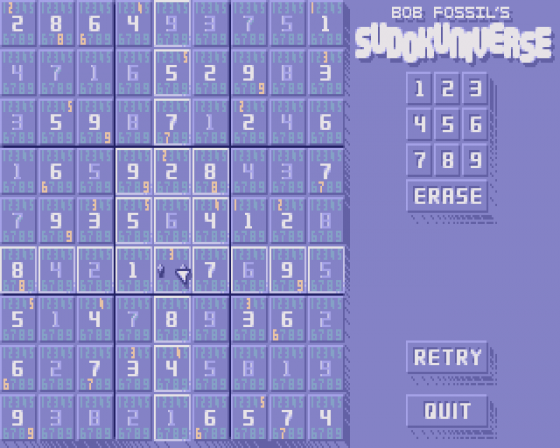