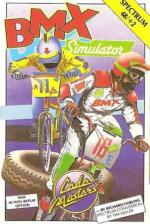 All the excitement of hurtling round on a BMX bike is brought into your living room by this latest offering from cone MASTERS, the new budget specialists. This is a conversion of the Commodore game written by one of the company's founders, Richard Darling.

A maze of oil cans, tyres and planks is viewed from above as two bikes hurtle around its tortuous twists and turns. Each race consists of three laps of the course, which must be completed within a time limit. There are three controls, left, right and pedal. There are seven different courses in total, though you may choose to only play over some of them.

Hitting obstacles sends the hapless cyclist hurtling over the handlebars. The poor chap then wastes precious time mounting up and pedalling off. If the two bikes collide, then the slower rider is thrown off.

The contest takes place against the computer or another player. In two-player mode if both players get round within the qualifying time, they progress together to the next race. If only one rider makes it, he takes on a computer opponent for the remaining rounds. Some corners are banked, and the riders can use these to help get round the bends. Turning becomes more difficult as speed increases.

Score depends on the time remaining at the end of a race. This accumulates from round to round to give the final score. If there is a closely contested finish, a replay option can be selected and the race seen again in all its glory - even running the really exciting bits in slow motion!

'Sorry, but I don't really see the point in this. It's a boring game about a sport that went underground years ago. The only pleasure that I derived from this was watching the players fall off their bikes - they fly and bounce quite well. Other than this BMX Simulator was a bit of a dead loss for me. There is a large amount of luck involved, and I never really left like I was in control. There are plenty of good budget games around at the moment: I'd fork out for one of those and stay away from this if I was you.'

'MASTERTRONIC continue on their road to success. BMX Simulator is a very polished bit of software, with many options and superb presentation. Even though the graphics are mainly two-colour, they give an excellent impression of 3D. The title tune contains some good noises, but they lack any co-ordination. Keyboard controls are kept very simple and very responsive. This is great fun to play, and perfectly priced at £1.99.'

'The screen shots on the back of the package aren't particularly inspiring, and the tune on the title screen has neat beats and things, but in completely the wrong places! Nevertheless, urged on by the cries of fellow reviewers I went on, and WOW! - I was stunned. The idea is very simple, but the game is really quite playable. The screen shots on the inlay don't do any justice to the detail of the graphics. CODE MASTERS have made quite a good job of this one - recommended.'

The idea is very simple, but the game is really quite playable. Keyboard controls are kept very simple and very responsive.