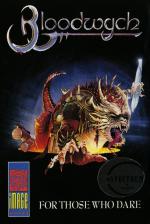 A long time in the planning, Dungeon Master inspired Bloodwych finally appears on the Spectrum. One of the oldest legends of Trazere Is the story of the Bloodwych, a secret order of psychic mages. For many aeons they ruled over the city of Trelhadwyl, meting out punishment and reward to the citizens and communing with the elements on their behalf.

One day Zendick, second in power only to their leader Grand Dragon, decided to renounce the Bloodwych and practice black magic: he banished all his Bloodwych brothers to an astral plane. Now sole master of Trelhadwyl he transformed the city. Dark and evil creatures of the night appeared and five towers were built to house energy sucking crystals which Zendick used to kill the land. But the immortal Bloodwych mages weren't finished yet. The spirits of two were sent to find sixteen worthy warriors to destroy the evil power. You (and a friend) play one of the spirits controlling the warriors who must recruit reinforcements and then collect four crystals from as many towers, take them to the fifth tower and destroy Zendick.

From the character selection screen choose a team of four from 16 warriors. Four psyche types Indicated by a different card suit are on offer Spades (fighters), Clubs (mages), Hearts (adventurers) and Diamonds (assassins).

Movement as all other functions is controlled by icons, but only the elected leader (with a box round his character icon) can call the shots. Zendick's creatures wander the maze of corridors that make up the towers. Energy is lost if your characters are hit by them, but weapons either carried or picked up in the maze can be utilised. Exploration is really the aim of this game, and interacting with characters met. Though slightly tedious tromping through miles of samey looking corridors, this should provide good entertainment for those interested in RPGs. The icon layout is a bit difficult to control, with full mastery needing a lot of practice.

'Bloodwych is a real challenge. You can spend hours exploring the game end interacting with the characters you come across - the trouble is that most of them only want to kill you! The control method is a little confusing at first, you do it all by moving a pointer around the screen and selecting the options to move, go into an inventory, light, etc. This takes time and while you are moving the pointer the other character can be stabbing you! Moving around the game is awkward too but you soon get used to it. - The way all the options are laid out on-screen is bad on the eyes, all tightly packed together and in different colours, so playing for long periods results in a bad headache. It's worth it though: I had great fun roaming around, finding keys and opening all the doors. Bloodwych has a lot of depth and is worth spending some time with.'

Bloodwych has a lot of depth and is worth spending some time with.