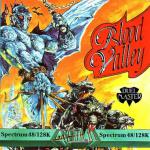 I like to imagine two sorts of games players - headbangers and strategists - as implacable enemies, facing each other across a yawning chasm lined with tons of software. "Mindless philistine!" cry the strategists, casting magic spells at their enemies. "Effete worms!" shout the shoot-'em-up fans, cocking their laser pistols. And so the two camps fight eternally.

Now, many software houses reckon that if they can produce a game which appeals to both camps, they'll clean up. A pity that Blood Valley isn't it. Graphically disappointing and strategically shallow, Blood Valley is based on the Duelmaster fighting fantasy books. The main plot is based around a hunt, where the evil Archveult chases a lowly slave. Archveult has a series of allies throughout the valley, while the quarry (one of the three characters, barbarian, priest or thief) has magical potions, food and treasure hidden around the valley for collection.

At the bottom of the screen are shown the quarry's tasks, such as to slay certain characters, to steal certain objects or to destroy magical artefacts. There are one and two-player options; in the one-player game, you play the quarry. In the two-player game, the player acting as the Archveult gets to deploy his allies throughout a map of the valley before the game starts.

The big prob is that the graphics in the one or two player windows are pretty ploppy; the characters are represented by little black scribbles running and poking at each other with swords, and the background jump disconcertingly from one area to another. On the right hand side of the screens are the tallies of score, gold carried, stamina, and current time, all of which you have to keep an eye on, since there's a time limit to your quest to escape from the valley (or, in two-player mode, to hunt down the quarry).

Blood Valley isn't bad in two-player mode, but in one-player mode it loses out tremendously in comparison to superior products like Platoon. I know the theme isn't that similar, but that's the wort of quality Blood Valley could have been, and dismally fails to achieve.

Disappointing and shallow combination of combat and role-playing game scenarios.

Disappointing and shallow combination of combat and role-playing game scenarios.