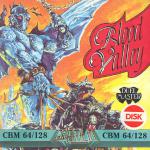 Over the world of Orb, the Archveult of the Valley of Gad reigns supreme. In the spring of each year he chooses a slave to set free, hunt down and kill for sport.

The roles of hunter and hunted are designed for two players, although a solo option is included. The player acting as slave has three different characters to choose from - Thief, Barbarian or Priest.

The movements of Archveult and his quarry are shown simultaneously one split screen display. Unfriendly valley inhabitants are defeated in hand to hand combat. Food, gold and other collectable bonus objects boost stamina rating and increase bargaining power.

Archveult pursues his quarry and has control over three henchmen who enter combat when the slave approaches. A scroll displays the stamina level of both characters, distance travelled and amount of gold collected. The Hunt lasts five days and a clock displays the countdown.

Another blend of arcade and role-playing games fails dismally to make the grade. Well, I say arcade, but all this amounts to is pushing the joystick in the direction you want your tiny sprite to run and pressing fire to poke the opposition with his blade.

Role-playing doesn't show its face in any great shape or form either, so in the end, the gameplay is so shallow that the interest level plummets wherever your gaming interests lie. Sprite animation is limited to a minimal number of frames and the quality of some of the backdrops shaking past is questionable to say the least. Not a game I'd pay ten pounds for.

The potential of Blood Valley has been utterly ruined by a combination of abysmal on-screen presentation and monotonous game elements.

The graphics are jerky, minuscule and indistinct, and the sombre soundtrack is unappealing. These deficiencies might be excused if the gameplay was interesting; however, it amounts to walking, bashing, collecting and occasionally swapping locations.

With two players the boredom is simply compounded: the range of movement is too limited and the action quickly grows repetiive. It could have been a roleplayer's dream but, as it stands, it's a nightmare.

Graphics 22%
Gaudy and indistinct backdrops and confusing, of colourful sprites.

Sound 29%
No in-game effects, and the title music soon grates.

Lastability 14%
Dreary and laborious action is only rescued by the two-player option.

Overall 23%
A poor interpretation of the role-playing books, consisting of uninspired and unvarying gameplay.

A poor interpretation of the role-playing books, consisting of uninspired and unvarying gameplay.