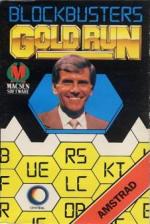 Quiz game fiends can really go to town with these two little gems. They've got the nauseating theme tune, the tacky logo, even a picture of Bob Holness on the inlay - what more could you ask for?

Blockbusters, in case you didn't know, is a quiz show produced by Central and broadcast throughout the ITV regions. It's a combination general knowledge and board game, the object being to form a line of lettered hexagons from one side of the board to the other, or from top to bottom.

The quiz aspect comes in actually getting each hexagon - to do this, you must answer a question correctly. The question takes the form of a clue, the answer to which has the letter in the hexagon as its first letter. All questions are open to both players - the first player to press his key has the first chance to answer. The questions are printed up quite slowly, and can be interrupted by either player pressing his key. However, interruption stops Arnold from printing out the remainder of the question, so you'll have to answer on the basis of what you already have. If you answer correctly you'll get the hexagon, plus the choice of the next hexagon to be played for - if not, the whole question is passed over to your opponent.

That, as far as Blockbusters the computer game is concerned, is pretty much it. The TV show groups these two-player games in threes and has a single-player extra round for the winner of the group. This extra round is, of course, the Gold Run. Here, you must form a line of hexagons again, but this time your opponent is the clock also, if you're really interested, the questions take a slightly different form.

This is meant, I think, to be good family entertainment. If so, it's a pretty strong example of why computer family entertainment doesn't work - these games are dull and limited. The harder skill settings only serve to test typing speed there is just no way to vary the game at all. The questioning mechanism is less than wonderful - it can spot minor misspellings and give you a second chance, but it won't accept plurals if it's expecting a singular. As for overall programming, that's not too hot either. Gold Run in particular is prone to crashing in normal use!

Quiz games on cassette are, in general, a waste of effort - these two certainly are. It's not just that the questions are few in number and take a long time to load - to make matters worse you need an extra program, at £5.95 if you please, to write some of your own.

I suppose it'll sell to hardened Blockbusters fanatics, but for me it lacks the one essential of the TV program - the way you can turn over and watch Charles In Charge instead. Now there's a game idea...

As I've said before in these pages - and as I'll doubtless say again - I like a good quiz. I don't think Blockbusters falls into that category; some of the questions are reasonably intriguing, but there aren't that many of them. And the game format I found a bore.

As a two player game this isn't too bad since a contest might get quite exciting. You'll probably have to be a fan of the TV series for that to happen though since quiz shows on computer are always pointless because there are no prizes. Interesting questions for a while but the game format rapidly palls.

P. Picture of Bob Holness on the inlay.

This isn't actually a good quiz. Some of the questions are reasonably intriguing, but there aren't that many of them.