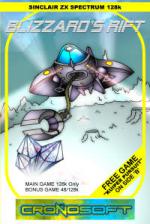 Blizzard's Rift is the latest in a long line of titles from accomplished Gamesmith Jonathan Cauldwell. A name familiar to readers of RGCD, and indeed anyone with their fingers firmly on the pulse of the Spectrum scene.

Assuming the role of financially-challenged bounty hunter; Digby Blizzard, you've recently recovered the flight recorder of a ship once belonging to fabled space adventurer Henri Latrine. Centuries ago, Latrine was rumoured to have discovered distant alien tombs filled with treasure. His fame was short lived however, as Latrine went on to do a 'Matthew Smith', and suddenly disappeared without a trace. With the black-box detailing the locations of all the planets Latrine visited, your mission is to explore these mythical alien resting places and loot them for all their worth.

After selecting your control method from the comprehensive list the game presents you with a 'galactic' map, reminiscent of Firebird's Elite. Presented on the map are eight star systems, each comprising between three and five planets, that make up the games main levels. The location of a Casino system is also provided, allowing you to gamble your hard earned credits in a mini-game of Poker.

Beginning in the Pollastre system, a Thrust-style level (following one of two basic structures) represents each planet. The first of these structures takes on the form of a claustrophobic maze style layout, offering points for collecting diamonds and destroying enemy turrets. The second structure contains tiles that wouldn't look out of place in a platform game, while the layout presents a much more open and forgiving playing field. There is a catch however, as this type of level yields no points for vanquishing enemies and only half the points for collecting diamonds. As well as the aforementioned turrets and diamonds, each planet contains the all important teleporter object - providing the sole means of exiting the level. All of these objects are depicted via the small onscreen map that the game helpfully provides.

As your fuel and ammunition are finite the game provides a shop (humorously referred to as the 'Outernet') that can be accessed at any point in a level. Amongst other things, an expensive 'Booster' item can also be purchased which, apart from depleting your fuel much quicker, doesn't seem to offer any advantage (Inadequate research here methinks - JM).

Travelling to other systems requires a somewhat tedious hyperspace sequence, presented from a first-person perspective. The occasional unarmed bandit appears during these sequences, posing no challenge and serving as little more than a means of easily increasing your credits. In fact, the only threat they pose is to George Lucas' intellectual property.

The graphics do a good job of portraying the objects they represent and the level backgrounds are a welcome, colourful addition. In addition, the physics engine and pixel-accurate collision detection go a long way towards making the game feel believable. As with Izzy Wizzy (reviewed in RGCD #02), Blizzard's Rift is totally bereft of music and the sparse sound effects only add to the problems of this potentially great game.

While there's a lot to offer in the way of planets to explore, one of the main criticism's I have is of the games steep difficulty curve. Blizzard's Rift is an extremely unforgiving game with a single hit from a turret, or simply touching a wall, meaning instant death. There's a certain amount of satisfaction to be gained from applying the precise amount of thrust needed to save your ship as you navigate through the maze, but as you hover for a split second contemplating your next move, one of the deadly accurate turrets zeroes in and subjects you to an undeserved and premature end. To add to the frustration the turrets frequently perform this feat whilst offscreen - an irritating occurrence that happens all too often.

Blizzard's Rift is a great concept that attempts to tie together well-established facets of several games. I wouldn't consider it a bad game but ultimately, it tries to do too much. Essentially, Blizzard's Rift is a jack-of-all-trades yet sadly a master of none.

A great concept that attempts to tie together well-established facets of several games. I wouldn't consider it a bad game but ultimately, it tries to do too much.
Logout