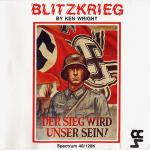 Now you have the chance to refight the campaign which led to the Fall of France in Blitzkrieg - a wargame based on the German invasion of Holland. You too can crush defenceless neutral nations beneath your jack-boot heel. Nice to be the bad guys for a change! Blitzkrieg is simple to play. On screen, you get a map of the Benelux countries and north-eastern France, with cities, rough terrain and forests marked on it.

Also on screen are various different unit icons, arranged according to what army they belong to. Icons reveal where Allied troops are at the beginning of the game, but on the first turn they will disappear from the screen not to appear again until your troops are within a certain distance. This limited intelligence system is supposed to recreate your uncertain intelligence reports, and it can be a right pain to think you have a clear road to the coast ahead of you and then run into the Belgians.

Movement is also pretty straightforward. You order your forces by army: and instead of specifying a particular destination for each unit in the army, you just tell the computer where the left flank, centre and right flank should end up. This is far more realistic than most computer strategy games: in real life, an army is given a 'line of advance' it should follow, and the positioning of flanking forces is particularly important.

Once a unit has been given a position it has to keep in relation to the army's centre. This leads to some rather odd routes being taken from time to time.

Below the map window, there is an instruction window which tells you what options you have at that moment. Pick one of five armies, then move the centre arrow to the target you want, set left and right flanks, and say whether they should attack whatever's in their path, defend or use their initiative. Do that for five armies and that's the game.

Exit, watch the combat calculations, scream in fury as the French duff up your favourite panzer corps, then start again.

When combat takes place, the units fighting flash in turn and a number indicates how much damage each has taken.

One of the more inventive strategy games and a rare chance to play the bad guy!

Achtung, Britischer sweinhund! Neat strategy game that lets you crush democracy... For once, you get to play the bad guy... Try it for Christmas!