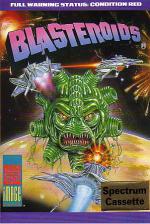 There really isn't much that's new under the sun. Some of the most playable games tend to be those that've been around the longest: the Breakout/Arkanoid/Batty imitators for instance, or, as here, the Asteroids clones. Blasteroids was a recent arcade reworking of that classic coin op, and while arcade standards have come far enough to make a revamp arguably worthwhile, the same cannot really be said for the Speccy. In other words there is precious little real difference between this new Spectrum version of Blasteroids and the antique conversion of the original Asteroids by a company that has long since slipped down the software dumper - except that Blasteroids will be available in the shops when you walk down there tomorrow and Asteroids hasn't been seen in years. Ah well, such is progress.

I'll assume you haven't been caught in a space warp yourself the last few years and know roughly how the game works. Oh, you don't? Well, okay. Basically you control a little space ship stuck in the middle of an asteroid field and you have to blast your way out. Every rock you shatter breaks into smaller lumps, each of which you have to pick off or else they'll wallop your ship and sap your energy. The great thing about both games is the way the space ship behaves. Like a real one, each action has an equal and opposite reaction so that any ill judged use of the thrusters can quite easily send you spinning out of control, bouncing off asteroids and the like and losing energy like crazy. To recover you have to spin your craft around so that the tail faces the way you're going and use the engines to slow down again - tricky, since the screen is so crowded you'll soon hit a trillion aliens and rocks and things and be bouncing around like a pinball.

What Blasteroids basically does is add a number of gimmicks to this format. These include a choice of spacecraft which you can switch between at any time (a fast one, an armoured one and a heavily armed one), purple asteroids that reveal power ups when you shoot them and alien ships that donate various temporary weapons and powers, including shields, a cloaking device and double blasters.

Add to these power leeches that home in on you to sap your energy, seeker asteroids that fly towards you at high speed when shot, four levels of difficulty which each consist of numerous sectors to blast through, space warps, a galactic map and a giant alien named Mukor and you'll realise they've added all sorts of stuff to spice up a game that was already immensely addictive and playable, if lacking in variety.

One thing you can say for it, and that's that it's very good for the ego! The easy level allows you to warp through numerous sectors without much danger (assuming a degree of competence), up to and past a first confrontation with Mukor. Other galaxies are much trickier.

In some ways I feel a bit unfair having a go at this really. Blasteroids is obviously a perfectly fine and competent version of a game that I've been familiar with for donkey's years. I've played it in arcades in Filey (it all comes out now, eh?) on an ancient PET, in 16-bit variations and it's always fun, even if it doesn't hold the interest in quite the way that Arkanoid clones do.

With this version my only real criticisms would be that the screen is too small, your ship is rather large, and you find yourself whizzing off one side and back on the other at a disconcerting rate. If ever space could be said to be claustrophobic, it's here.

What I'd tend to have to end up saying is that if you've not played one of these games before you'll have a ball. If you have, you may find yourself rather 'so what?' about it all, as I did,

Fine update of an addictive, but rather one key arcade classic.

Fine update of an addictive but rather one key arcade classic.