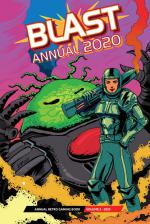 Amongst the myriad of thoughts that zip back and forth across the synapses of my brain, I fleetingly reckoned that retro-gamers may look back upon 2020 as the year we were spoiled for choice when it came to annuals. As I write this, however, at least the man behind the more recent Crash (Spectrum) Annuals, feels that, far from annuals being the in-thing, there is now enough demand for a new Crash quarterly magazine...! Phew! Fifteen years ago, there were so few new Spectrum games that Jonathan Cauldwell carried the entire scene on his shoulders, and now the scene is so big that Crash is confident that it will have enough reviews of new games for the Spectrum alone to fill a 68-page issue every quarter.

In three little years, we've moved from an annual to a quarterly magazine, eh? Makes you wonder not so much whether we are being spoiled, but whether we might get overwhelmed!

Picking up the second volume of Blast, which weighs in at another 210 (!) pages of articles, reviews, ads and interviews, you could perhaps sum it all up by just saying that, well, if you liked the first one, this is just more of the same. Although it was released just a few months after the first volume, it's neither 'later' in a chronological sense nor does it contain stuff which didn't make the grade for that initial tome. It's a fully fledged book in its own right. It's of the same high quality and it's as big, as colourful and as rammed with features as you could imagine. (Again, I also need to declare an interest too because I helped to proof the initial draft, although I didn't contribute any of the articles.) 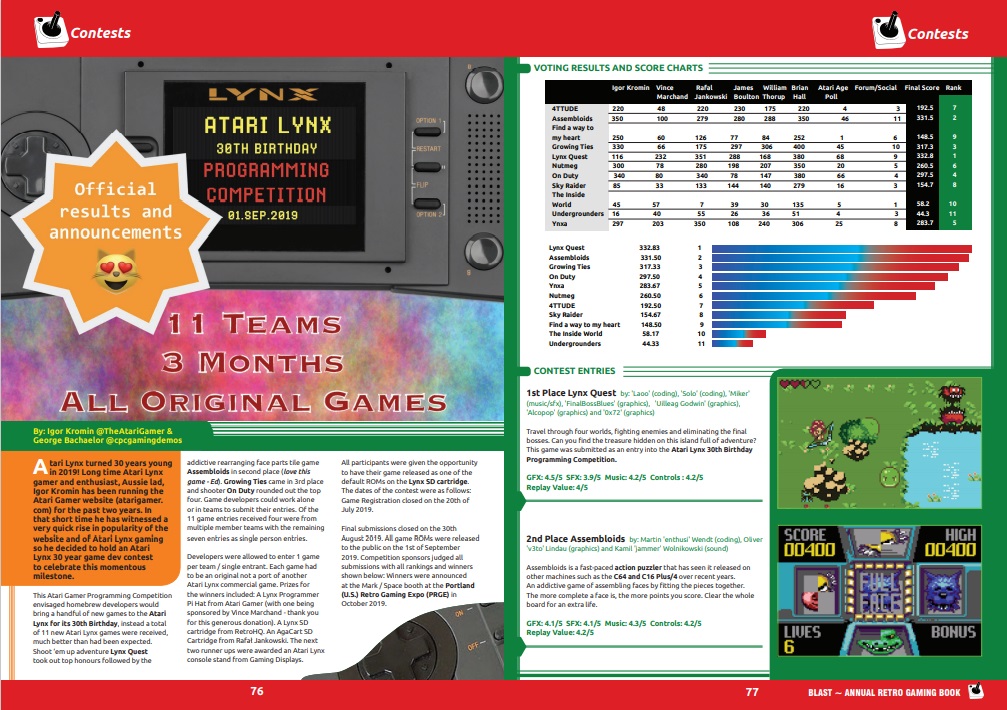 The format is similar to the first volume, with a few initial reports on different demo parties and conventions up and down Europe leading into another fairly ecclectic range of articles. Amongst which we've got a look at the fairly mainstream Sega Genesis Plug-And-Play, a range of articles on the ZX Next (including an interview with master-coder Jim Bagley) and then a whole new section of competition summaries. In this sense, Volume 2 is very different from the first, with extensive articles on the SEUCK (Shoot-'Em-Up Construction Kit) Compo 2019 (C64-based), the Atari Lynx Games 2019 Competition, the famous CPCRetroDev2019 Amstrad competition, the ZX-DEV MIA Remakes 2019 (Spectrum) and, finally, MSX Dev 18. (And, yes, MSX Dev 18 did take place in 2019, it's just weirdly-named!)

Because competitions for retro machines often have their own websites and forums, they often do not get the attention they actually deserve, particularly in their formative years. CPCRetroDev, for example, is probably now the most famous of them all, not least of which because its winners receive not-insubstantial cash prizes. Lest we forget though, with its base in Madrid and its initial websites in only the Spanish language, it managed to run for its first three years without many Amstrad fans being aware of its existence at all! So it's very nice to see Blast Annual 2020 Volume 2 dedicating lots and lots of space to the competition, its entrants, and the games that were created as a result...

That is, it's nice in the sense that it's not something I've seen on any website or in any other publication. But whoaboy, is some of this in-depth reportage seriously boring...! 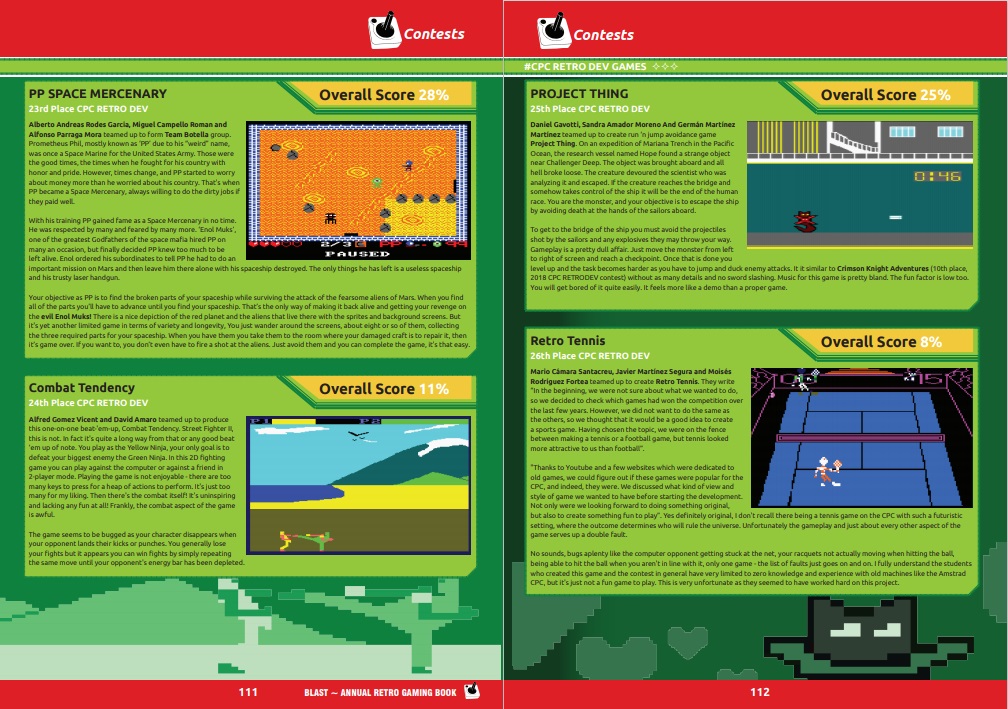 Blast Annual 2020 dedicates a whopping twenty pages to CPCRetroDev2019. Now if this competition had produced twenty great games for the Amstrad, there would be nothing to criticise about such a decision. In vintage years (i.e. 2016), CPCRetroDev has resulted in the Amstrad scene exploding overnight with a slew of very good new games across a whole host of genres. I even made my own YouTube video about this contest in 2016.

However, 2019 wasn't a good year and, to give him his due, George Bachaelor points this out in almost the opening paragraphs. "Most games," he writes. "Received low scores from me as they just didn't demonstrate the high standards set by previous contest winners." The trouble is George then goes on to review each and every one, desperately trying not to say outright that it's crap when it's clear from the screenshots that that's what it is.

Only the top five games are in any way worthy of being reported on, and that's what Blast Annual 2020 should have done - devote a page to reviewing each of the top five and put the other thirty on a single page, perhaps with a one-line summary of what the game was about and who, if anyone, it might appeal to. With a one-page introduction to the contest, this would still have made for a punchy seven page introduction to CPCRetroDev2019. But no, instead the entire 'flow' of the annual is disturbed by page after page of very nicely-presented... waffle! After just a few pages of reading it, I started to find it bizarrely humorous. Reading the account of a genuine Amstrad fan trying desperately to find some saving grace in games which range from mediocre to downright appalling is positively Chekhov-ian. By the time he's hitting the real stinkers, the article genuinely has hit a truly despondent tenor: "A very poor game to say the least. Graphics, tunes, fun factor... Everything is poor." Page after page of substandard games makes me think that, if you are going to include them all, it would have been better to count up, rather than down. At least then you'd be finishing with the cream rather than the dregs.

The good news is that you can, of course, flick past the RetroDev dissertation to the other competitions held in 2019 and these, fortunately, produced a smaller number of games written to a much higher standard. Hence, these articles are much shorter, punchier and more interesting. Indeed, many of the games reviewed therein really deserve the column inches that the CPCRetroDev article has taken up. If a game was written as a competition entry, it seems a decision has been taken to restrict it to half, or even a third, of a page. Chupi Games' Miss Input only gets a few paragraphs as a result, whilst Gravitica doesn't get reviewed at all. Ludic: Break The Loop, XRacing, Buddhagillie and some others get reviewed twice. Once in short form as part of the competition article and then again in the later reviews section. I don't see the logic for this. If you're reviewing all of the entrants for a competition, then just place the more extensive reviews in amongst the smaller ones. And if opinions differ as to whether an entry is a good game or not, use the second review as a 'second opinion' and adjust the overall score accordingly. 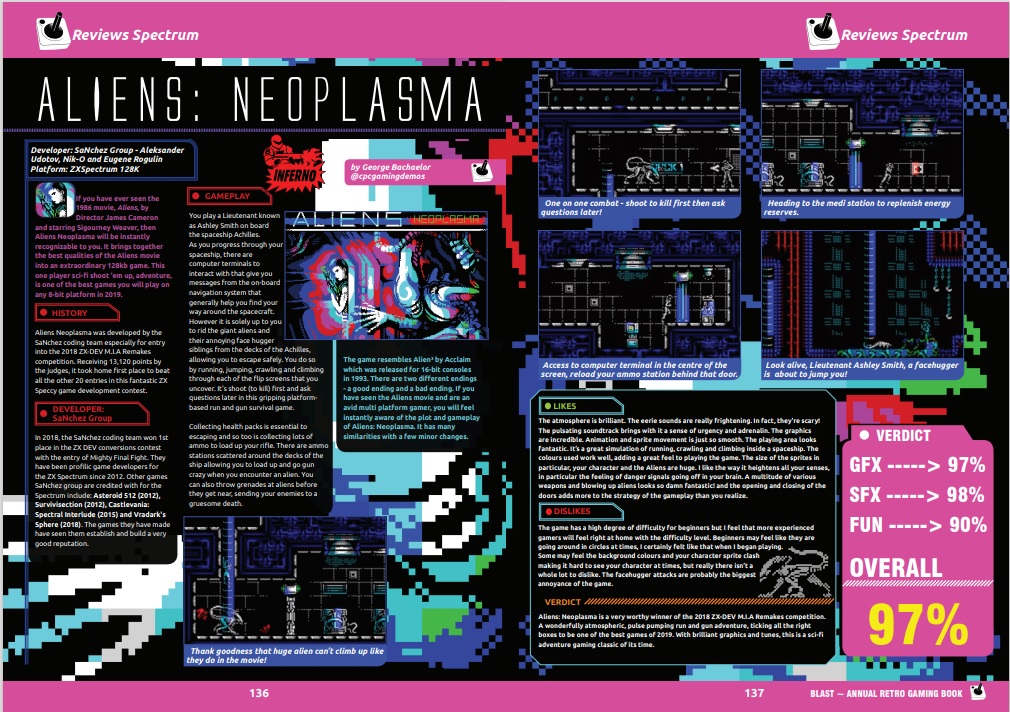 As with the first volume, after the articles comes a seriously comprehensive review section. I share Blast Annual's opinion that 2019 gave us three of the greatest 'technical achievement' 8-bit games ever: Aliens: Neoplasma for the Spectrum 128K, Super Mario 64 for the Commodore 64 and Pinball Dreams for the Amstrad. All three of them are reviewed here, and scored either in the high nineties or, in the case of Pinball Dreams, with the full 100%. I can't criticise these high marks because these games genuinely deserve them... retro gamers are going to be playing all three of them for years to come and they are already regarded as classics in their own right. And yet, as with the first volume, I do think the whole host of Atari 2600 reviews with unrealistically high scores can be legitimately criticised. Galagon and Wizard Of Wor Arcade are also awarded 100%. They're nice, sure, but nowhere near in the same league.

Indeed, stats fans might be interested to know that, in this volume, we've got 68 full reviews in total (excluding competition entries) with 61 of them scoring more than 70%. Stats fans might also be interested to know that not all of the games reviewed in this annual are from 2019. The Commodore Plus 4 games Adventures In Time, The Lands Of Zabor and Adventure Park are at least five years old. Presumably there were no new games for the Commodore Plus 4 in 2019, but there were plenty of other Nintendo, Atari and Amiga ones. Blast Annual 2020 could have reviewed those if it had wanted to. The Commodore Plus 4 reviews appear to have been crowbarred into the second volume for some other reason. Maybe someone on the team is just a big Commodore Plus 4 fan. That's not a bad thing though. The games themselves are not well known so there's no reason not to give them a bit of additional exposure.

Two other very small criticisms: Firstly, four of the games have also been previously reviewed in 8-Bit Annual 2019 which was by the same team. And secondly, some of the games reviewed are published as physical versions but the associated review doesn't tell you where you can get these from. I'd have liked to see the actual web sites for Matra, Psytronik and Bum Fun getting at least a mention considering the great work they do, and the fact that the game writers receive a royalty if you purchase the physical version (rather than download the free one).

Really though, and just as with the first volume, it is very hard to find much to criticise in this annual. At time of writing, it's not actually available as a hardback book any more, but at £5 for the digital version, and with each page bursting with copy, screenshots and ads, it's just as much of a bargain. In almost every respect it's a masterpiece; the only real flaw is, like with the first one, that the review scores need to be brought under control. It's better in some ways - in my opinion, the quality of writing and the care taken over presentation, spelling and grammar is higher. And, if you'd like your own 'souvenir programme' of the main MSX, Spectrum, Amstrad and C64 competitions of 2019, the articles here give a very good, and independent, flavour of what was produced. I can't begin to conceive of the work that has gone into its production.

Probably I'm preaching to the converted though. If you purchased Volume 1, and you've got to the end of it, there's no reason not to get hold of Volume 2 too. And, if they run Blast Annual in 2021, one can only boggle at how many volumes that might stretch to...!