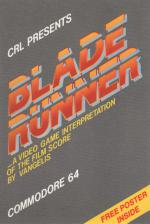 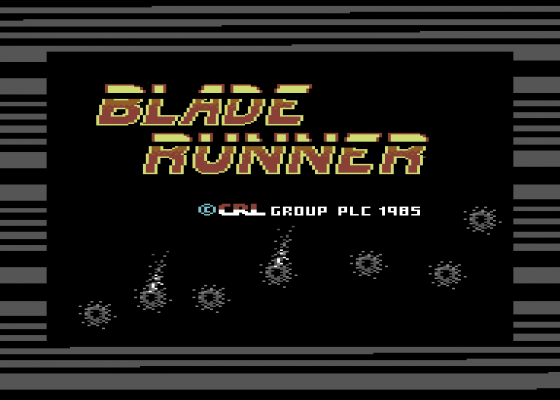 This must he the first game to be based around the music of a film. Apparently the rights to the actual Blade Runner film are so complex that the only way CRL could get the name of the film on their package was to licence the Vangelis soundtrack! So now you know.

The game is set in the not-too-distant future - twenty four replidroids, genetically produced human robots, have landed an Earth and are trying to destroy their creator and so end the slavery imposed upon them.

You take the role of a Blade Runner - a person employed by the police force to track down and kill any replidroids which land on Earth. There are six types of replidroids; a replidroid one is slow and pretty stupid and a replidmid six is superior to a human in its physical abilities and just as intelligent. 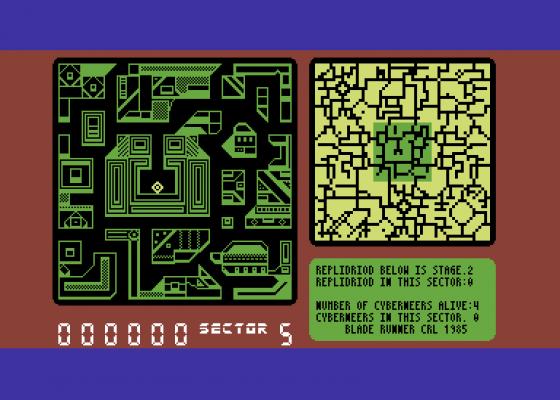 The replicants have reached your city and you've been assigned to kill them before they kill their maker. You start the game in a skimmer - a flying police car that allows you to travel through the city at high speed. In the skimmer the screen shows three displays, which all have to he used whilst playing the game. The main display is a short-range detailed radar map of the local area, allowing you to navigate the maze of streets. It also shows if there are any replidroids in the locality. A second, smaller screen is another radar map, although this one shows the whole city and your position in relation to the replidroids'. The final screen is a text readout giving information on the number and type of replidroids within the locality.

On the main screen your skimmer is represented as a cursor that can be moved about the streets. If you locate a replidroid, then move your skimmer over it and press fire. You automatically land and are put into chase mode.

The screen switches to an Entombed-type display of a crowded street. The skimmer lands, you get out and the chase begins. You have to run after the replidroid and shoot it. Not an easy task since the streets are packed with people who must be dodged; if you bump into one then your game ends. You can run along the road if it's clear, but oncoming vehicles do pose a problem. 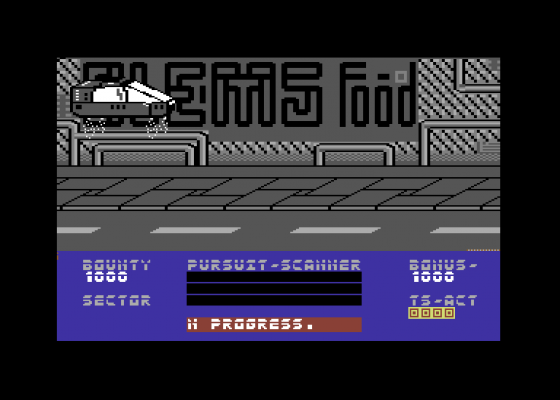 At the bottom of the screen lies a scanner showing how far ahead the replidroid is and whether any vehicles are approaching. If you let the replidroid outrun you it disappears off the scanner and your skimmer drops down, picks you up and the game switches back to skimmer mode.

When you land you're given a bounty based upon the replidroid you're trying to catch --1,000 for a replidroid one through to 6,000 for a six. Also, as you chase your quarry, a second bounty ticks down until you catch it. When you do, the bounty remaining is turned into points.

Disappointment One had to be the music - after all, we're told this is based on the Blade Runner music by Vangelis NOT the Blade Runner film. Perhaps you don't know the film's music - it could have been written for a hypnotic game on the 64. However, Blade Runner the game has a sadly undernourished version in which you can hear how good it would have been but for some more 'production' value. In that, it's like the game, because Disappointment Two has to be the content. Running along a grey pavement avoiding white and grey vehicles that kill you from the wrong side of the road and dodging white animated blobs set against a grey background suggesting ever so slightly the street scenes from the movie, that scrolls inexorably by in one direction, recycling the screen like a very cheap TV cartoon background - well it just lacks some vital ingredient somewhere. I am very sorry - somewhere inside CRL's Blade Runner there's a really great game screaming to be let loose, unfortunately they've tied it up. 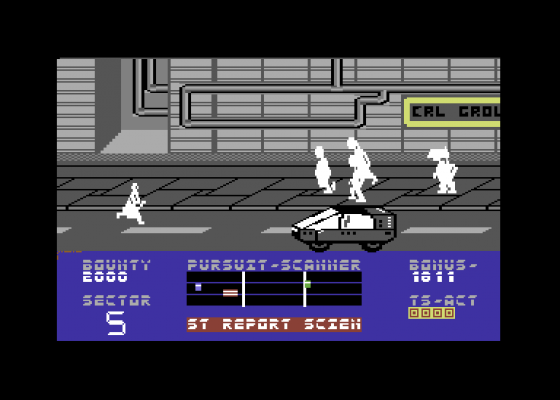 Despite being based upon the film's soundtrack, Blade Runner the computer game seems to borrow quite a lot of its scenario from the actual film's plot. Replidroid, Replicant? It's all very similar. Even the main-sprite seems robed in a very Deckard-style mackintosh. Blade Runner is very hard. After another ZZAP! minion phoned CRL to complain over the game's difficulty, he was informed that 'Once you've got your first Replidroid, you'll never put the joystick down.' Lucky I was playing using the keyboard option or I would have most certainly got hooked. As it happened, I wasn't and it's not likely that anyone else will be. The graphics are very sub-standard. The innocent bystanders getting pushed into the pavement by the running Replidroid look very Lowryesque, monochromatic matchsticks plodding through bland backgrounds. Landing and taking off to destroy Replidroids takes way too long, each time you have to sit through a convoluted animation sequence that soon gets tedious. Despite the hype, Blade Runner misses out on what was a potentially excellent game.

Blade Runner is one of my all-time favourite films and I therefore looked forward to the release of this game with anticipation. Unfortunately, I found it to be completely unplayable due to its difficulty. During the chase sequence you can either run on the road or the pavement. If you run along the road then you get hit by cars that are clearly *on the other side of the road*, and if you run on the pavement you get knocked down if you hit a pedestrian! There are other really niggly aspects too - the pauses at the start and during a game are a real pain. Whenever you start you're asked whether or not you want to redefine, the keys - this takes ages. Another massive delay happens, when the program switches from skimmer to chase mode: your skimmer *slowly* lands and the music *slowly* fades before your character is deposited on the street. All these delays during the game makes it terribly slow to play and therefore makes the whole thing frustrating. It's a shame the game has so many faults; if these had been ironed out then it could have been quite fun to play.

Presentation 57%
Despite reasonable options, but there are too many delays between games and lives which become a serious irritation. 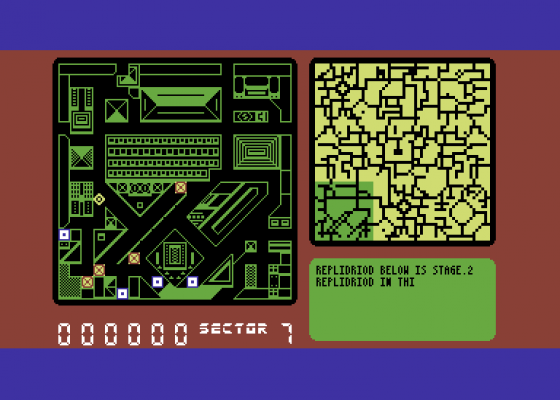 Value For Money 37%
Not worth the money even if you're an ardent Blade Runner fan.

Overall 39%
The potential of a Blade Runner video game has not been realised.

Very slow, unplayable and dull. Not worth the money even if you're an ardent Blade Runner fan. 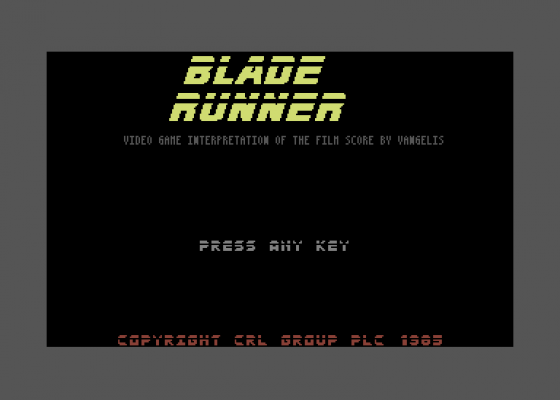 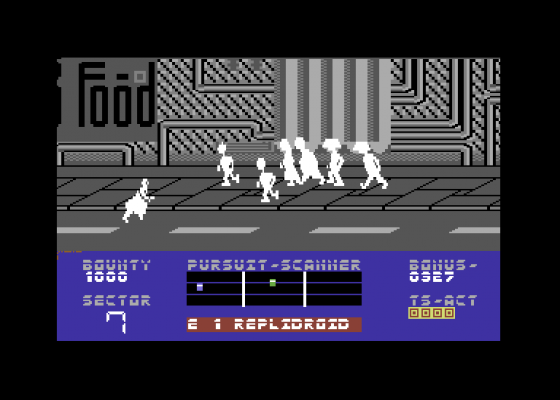 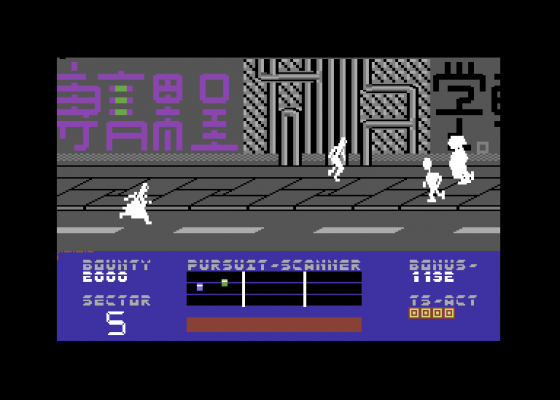 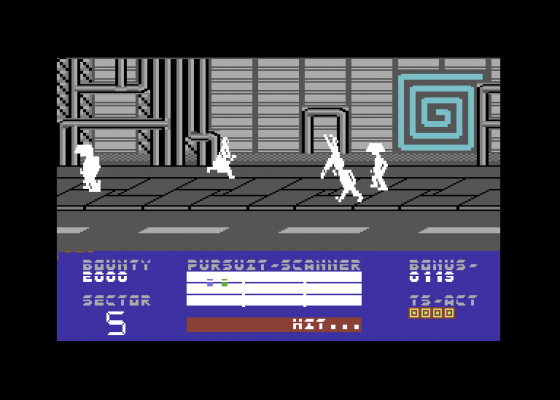 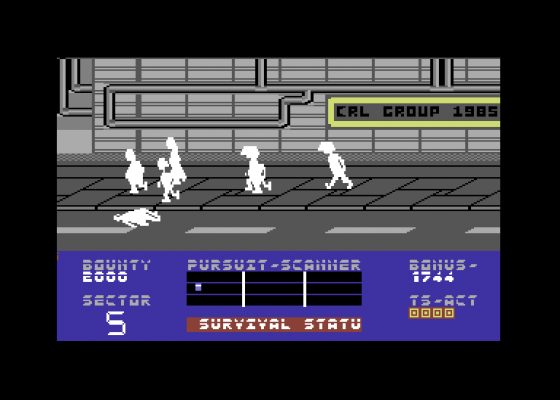