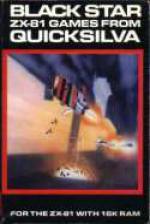 Funny how rarely ambitious graphics and an exciting game seem to get together. All the Quicksilva games I've played offer either one or the other - which is a lot better than neither, but not as good as they *could* achieve.

This game has graphics which are always interesting and sometimes dazzling (literally), but it's mostly frills; the game itself is a letdown.

You control a space ship flying down a tunnel which unfolds in 3D before you. The object is to bomb "energy ducts" (stripy bands running round the circumference of the tunnel) to gain the maximum points before you run out of time. And that's really all there is to it. Like falling off a log.

Unless something was very much amiss with the tape I got, a lot of wishful thinking went into writing the blurb on the cassette insert. The "pursuing aliens" - as which appear at the bottom of the screen, and which you can dodge by moving from side to side - aren't much of a thrill. You can easily avoid them by speeding up slightly, and as far as I can tell they don't do you any harm even if you just ignore them.

"Eight instrument displays"... yes, well, the only display you need to worry about is the one that tells you how many bombs you've got left. The rest are very pretty, but really just trimmings.

I don't know about the "seventeen levels" and "progressively difficulty". At no point was I offered the option of selecting a different skill level, so maybe this just means that you can speed the ship up as you get better. You'll get bored extremely quickly if you don't.

Effortless loading, responsive controls, nice effects, and a high-score table, but all this can't compensate for lack of excitement. Must try harder.

Effortless loading, responsive controls, nice effects, and a high-score table, but all this can't compensate for lack of excitement.