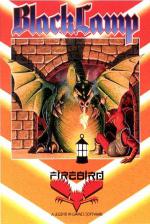 Since the theft of the enchanted lanterns from Allegoria, evil forces have been doing their worst in the land. Apart from having to raise court morale, Jolly Jack the jester is nursing delusions of grandeur and is hopelessly in love with the king's daughter Grizelda. Her father, true to form, doesn't approve. The king can see chance both to get rid of his daughter's unwelcome suitor and retrieve his lanterns by sending Jack off on the quest to fetch them back.

This brings us to the opening scenes of Firebird's Black Lamp. Quite what Grizelda sees in Jolly Jack is unclear, since Jack is rather on the stubby and chubby side, and looks distinctly downtrodden and gloomy as he sets off on his trek. It's something of a tribute to the game's graphics and animation that you can actually see this on the Spectrum.

Black Lamp is a horizontal flip-from-screen-to-screen arcade adventure, set in and around the buildings of Allegoria. Scattered over the screens are a number of lamps which Jack must collect and take back to store in one of several coloured chests in various locations. He can only carry one lamp at a time, so once you've got one, you must hunt for a suitable chest before collecting the next.

Your way will be blocked by a wide variety of baddies motiveted by the evil forces which took the lanterns in the first place. These won't necessarily kill you outright, but will deplete your energy level. The baddies range from werewolves, which flash past and don't drain off too much energy, through spitting witches and buzzards with explosive droppings, which are rather more harmful and should be avoided. You, as Jack, can ward them all off with bolts of magic from your belt, but some creatures take more shots to kill than others.

Aside from magic bolts. Jack can prolong his survival by grabbing useful objects lying around the place. A weapon, such as an axe, will make him impervious to baddies for 20 hits; a harp will give him musical 'bounce' and enable him to jump off high levels to the floor without injury; food and drink will top up his energy rating.

Although Jack basically trudges left and right between screens, he can also climb ladders and jump on to objects to reach shelves and gangways above floor level where many of the useful objects can be found. There is also some pseudo forward and back movement; if a rear exit is shown on screen, Jack can flip on to the screen 'behind', and similarly, markers at the foot of the screen appear when he can move on to a 'forward' screen.

Although based on the time-worn theme of exploring, killing, avoiding and collecting various objects, Black Lamp is extremely well implemented. The graphics, in a single colour against a black background (apart from the highly coloured chests) are clear and detailed, while Jack himself is beautifully animated, plodding doggedly on from screen to screen. The game oozes atmosphere, which makes it a pleasure to play - it truly is a shock to suddenly find yourself face to face with the dragon, for example. The accompanying music is surprisingly boppy; on other versions Jack wanders along to a rendering of Greensleeves, and although I think I can hear Greensleeves-ish bits in the Spectrum music, there's some hip hop in there too.

Another nice touch is the random starting screen for each game, and the fact that the lanterns, weapons, food, harps etc, will be located in different places each time you play, so that no game will be exactly the same as any other.

I liked Black Lamp enormously, although it's not without its minor irritants. I found the controls (joystick or redefinable keyboard) slightly slow to respond; quick aboutturns to blast away at nasties on either side being largely in vain. Also Jack must be facing in exactly the right direction to move back or forward a screen or to climb up or down ladders, which requires a certain amount of fiddly manipulation when all you really want to do is get the hell out of the firing line. At the beginning of the game you'll find Jack moves slowly, but he will speed up progressively as the quest continues.

This is definitely a major contender for search and collect game of the month. Not too much adventuring to get in the way of all that blasting.