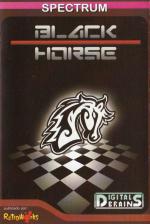 I'm far from being a great chess player - learning how to play it well takes a degree of study that I don't have the time for. However, I do know how all (Well, most!) of the pieces move, which is useful if you're interested in Black Horse, a new Spectrum game from Digital Brains.

Starting the game draws a superior isometric 3D grid with your piece, the black knight, positioned on one of the squares within it. The grids are essentially "cut outs" of a chessboard with the familiar white and black chequered pattern. What's different is that the grids aren't square. Instead they have the look of jigsaw pieces, with sections that jut out in different directions.

The aim of each grid is to collect the "star" token by manoeuvring your knight, who can only move like a regular knight chess piece, onto it. You start on a grid where collecting the star is easily done and progress through grids which introduce ever more features and enemy chess pieces.

Whether you like chess or not, the game is a good puzzler, and it has plenty of variety whilst being extremely intuitive to play. Full instructions are included, and displayed before the game starts, but it's programmed so well that you're unlikely to need them. Perhaps the most important thing to point out is that, as you progress, it gets much easier to die. The enemy chess pieces behave in different ways depending on which grid you are attempting, and this can catch you off guard. For example, the King can only move one square in any direction, which means your Knight can quickly outsmart him by moving so that a clear way to the star is opened, either with or without removing him from the board. You move, then he moves and, assuming you're still alive, you rinse and repeat.

However, on later grids the enemy chess pieces do not move after you do. Rather, they lie in wait until you place the knight on a square that they can legally move to. Watching how (or if!) enemy pieces move after you make your first move will give a useful indicator of the strategy any particular grid will need. You have five lives to get as far as you can.

It's hard to get too excited (if you're me) about chess but I would imagine there's a ready-made market of Black Horse players - essentially it's a cross between chess and Ultimate's Alien-8 and, although it may be a puzzler at heart, the presence of the enemy pieces additionally introduces a competitive edge. You won't find the Spectrum "thinking" for 60 seconds either - it moves its pieces instantly!

Black Horse is available from Retro Works on limited edition cassette for £4.99 or download free from Everygamegoing (https://tinyurl.com/zzbm3vc).