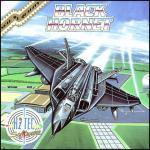 Mark "Oops sorry!" Caswell isn't very stealthy at the best of times: stand him within ten feet of a fragile object and he'll break it just by looking at it. But sit him in the cockpit of a Stealth Fighter airplane and he'll whup anyone's ass (it's the rest of the office's fault for telling him he looks like Tom Cruise). The Black Hornet awaits...

The product of umpteen years research has just been revealed: The Black Hornet. An advanced Stealth Fighter that's so fast, and deadly, it can be in and out of enemy airspace so fast they barely hear the sonic boom before they're up to their necks in explosive ordnance.

And so it's no surprise that at this point there's a plot twist to introduce the villains of the hour. They've apparently done some very nasty things, so the free world has decided to send Black Hornet in to kick some enemy backside. As a brave pilot who doesn't flinch in the face of adversity, you're on your way to meet the enemy troops.

The game is a vertically scrolling shoot-'em-up where your aircraft zooms up the screen to greet the enemy troops zooming down to kill you (surprise surprise). At your disposal is a permanent machine gun, and four optional payloads. These are fitted with missiles, smart bombs, homing missiles and ordinary 'thickie' bombs.

Points are scored for destroying both airborne and ground-based objects (whether mobile or stationary). When an airstrip is spotted, land on it (whether it's a friendly or enemy base), and you enter the option screen. Here you get the choice to shell-out on weapons, repair damage, refuel or buy speed-ups (handy to dodge enemy bullets).

There are four samey levels to battle through, and as soon as you've waded your way through the current one you're whipped away to the next.

A vertically scrolling shoot-'em-up, Black Hornet would appear to have been developed on the Shoot-'Em-Up Construction Kit and tweaked for commercial release.

Sadly, if it was produced with the SEUCK utility, it wasn't tweaked enough - there's no excuse for baddies that use such boring attack patterns as this.

The graphics are awful (especially the stomach-churning backgrounds), and worst of all the game suffers from the 'disappearing bullet syndrome', the ever-present landmine that's sunk many a promising shoot-'em-up.

On the plus side, the multi-load is well thought out and the game doesn't auto-restart once later levels are reached (Hurrah!) but when each level is exactly the same as the one before it, except with a different background, it hardly matters. Black Hornet? Buzz off! 39%

Hookability 56%
There is a small amount of initial interest...

Lastability 40%
...which soon flies right out of the window!

The multi-load is well thought out and the game doesn't auto-restart once later levels are reached... but when each level is exactly the same as the one before it, except with a different background, it hardly matters.