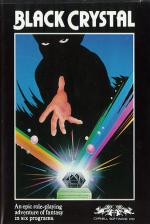 Black Crystal is another role-playing adventure in which you can become a warrior, wizard or elf in a quest to find and use the rings of creation to destroy the Lords of Chaos. Black Crystal is split into six parts which have to be played in the correct sequence in order to take the player through the Land of Beroth, the Castle of Shadows, Shaggoth's Lair and to the Black Crystal itself in the Dark Tower.

The six parts are supplied on two cassettes which come attractively boxed with a short booklet. This gives details of the various maps and commands, and contains a short story to set the scene.

It seems that evil has returned to the earth, and you have to find the lost rings of creation to banish evil from the universe forever.

A load level check precedes the first program. On loading this, it displays a map of the Kingdom of Beroth and is the doorway to the other map sections. The cursor keys are used to move around the map in the usual way. However, the intrepid warrior (or whatever character is chosen) is frequently challenged by monsters of various types. Monster battles are in real time and, although physical and spiritual powers can be used in attempting to overcome your opponent, there is a good chance that it will win and you will be sent back to sanctuary at the beginning.

You are challenged so often that it is very difficult and requires considerable perseverence to get more than a few steps into the game. Even after cheating - I broke into the Basic listing and altered the rules so that I could continue after being 'killed' in battle and not sent back to sanctuary - it is not easy to make significant progress.

I think this game really needs re-working to make the initial stages less difficult and less reliant on chance, otherwise a large part of the adventure is likely to be uncharted by all but the most persistent players.

By splitting the adventure into six programs, Carnell have certainly been able to provide considerably more variety and detail than otherwise, but this does mean that six lengthy loads are needed to complete the game. Each program contains a game save facility.

By splitting the adventure into six programs, Carnell have certainly been able to provide considerably more variety and detail than otherwise, but this does mean that six lengthy loads are needed to complete the game.