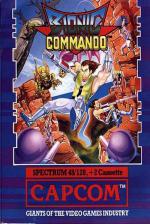 Bionic Commandos, if first impressions are allowed to last, is a reasonably faithful conversion of the coin-op that just hasn't ended up being particularly playable, visually exciting or, well, interesting.

Sure, it looks reasonable, and there are a few nice touches, but it appears to be so poorly programmed - the graphics flicker like crazy - that most of the ideas seem to have been wasted.

There's no plot worth discussing. All you need to know is that you - a bionic commando - have to infiltrate an alien military establishment and destroy everything on the way.

B.C. Is a variation on the platforms and ladders theme, except there aren't any ladders (What a crap analogy! Explain yourself - G.T.) The ladders have been removed and the platforms just hang in the air. The controls allow you to move left, right, up and down and fire. No jump. So how do you get up to the next level of girders/ earth/platform? Easy. You use your telescopic bionic arm like a lasso to cling on to the girders and winch yourself up.

The general idea is to work your way to the top of each level, shooting the bad guys and um, well that's it really. There's a fair number of aliens to bash. There are nasty little flicky things which lurk along the platforms and occasionally, chopping off your feet.

These, along with irritating little stormtroopers who jump around and shoot at you, form the main body of the alien army. As you progress deeper into alien territory (I always feel you should be going down in these games, don't you?) more bizarre foes appear. One of the most interesting is a kind of huge metal kangaroo with a tiny guy controlling it at the top. There are also enormous - and largely static - robots that you can scale, at your own risk.

The gameplay definitely improves as the game goes on. Parachutes fall from the sky bearing enhanced weaponry. As far as I could tell, the only effect collecting one of these items has is to make your bionic arm longer and faster. Once you've got a highly developed arm (no tittering at the back) things begin to hot up. You can cover large areas in seconds, and it has to be said there is an element of cartoon style action swinging on on a bionic arm like Tarzan on a vine and blasting away like Judge Dredd in a bad mood.

Don't be mislead into thinking the graphics are of cartoon quality. Although colour has been used to some effect, there are parts of scenery that are simply inexcusably poorly drawn - even unfinished looking. Huge areas of square white "stuff" at the top of some levels just look ridiculous. Everyone should know that you just can't get away with that sort of thing.

Your hero, a dwarfish black outline figure scuttles around satisfactorily, apart from the odd occasion when he develops an incredible case of the flickers. Control is tricky at times, and unless your joystick is very accurate, you'll have trouble using your arm in those vital diagonal directions. Since there is no "Extend arm" control, you have to combine left and up, right and up or use up alone to extend, which takes an awful lot of getting used to.

As well as having a limited supply of lives, you're racing against the clock too, so life is really quite difficult.

Bionic Commandos is a disappointment after the last Cap-com title, Streetfighter. It's fast and furious, but feels unpolished and is graphically simplistic. If you were a big fan of the arcade game, maybe this is one for you. It's not crap, but it certainly isn't what we've come to expect.

Acceptable though unexciting conversion. Lots of nice points negated by lots of niggles.

Fast and furious, but feels unpolished and is graphically simplistic.