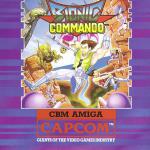 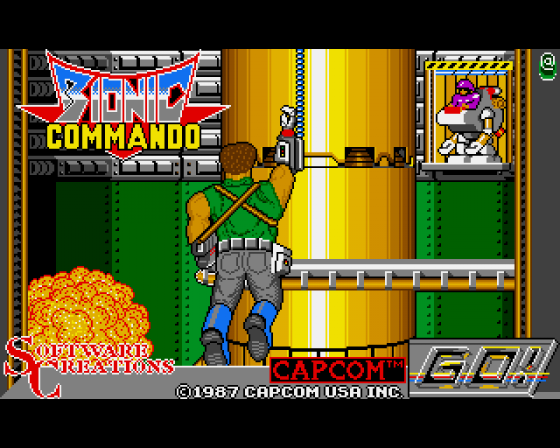 Ten years ago, alien forces invaded planet Earth (although I can't say I noticed. No, that's silly. Forget I said it). They began to drain the planet of its valuable resources, leaving behind nothing but desolation. Since these forces now control the food and water supplies, they have been able to impose a tyrannical rule over the human race, threatening the use of a powerful missile to destroy the globe if their needs are not met.

An elite fighting force has been in secret training and is now ready to defeat the cruel alien leaders. These are... the Bionic Commandos.

Soldiers are hand picked and brought to the peak of physical fitness to deal with any eventuality. After this training they are given a further advantage; every Commando is fitted with an extending bionic arm, useful for climbing and swinging through trees, swatting enemies and catching objects. 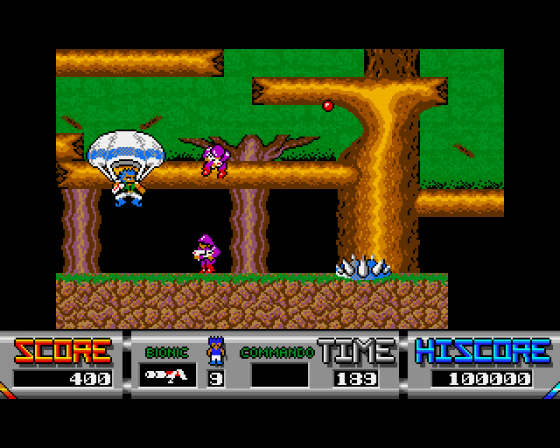 You play the part of one of these Commandos, heading the infiltration team into the enemy base. The game begins with you being dropped by parachute into the forest at the entrance to the enemy stronghold. The forest is patrolled by troops of enemy soldiers, armed with grenades and rifles, as well as killer bees and deadly flying creatures that biff you from above.

If you can survive this, you then travel into the aliens' castle dodging robots and cannons, followed by the base itself. At the end of the fifth stage lies the central launching computer, the destruction of which should ensure the safety of the human race.

I bought an Amiga secure in the knowledge that any 16-bit arcade conversions would be pretty damned close to the coin-op originals. The launch of Bionic Commando has proved to me that this is most certainly not the case, because, quite frankly, the game is utter pigeon-poo. 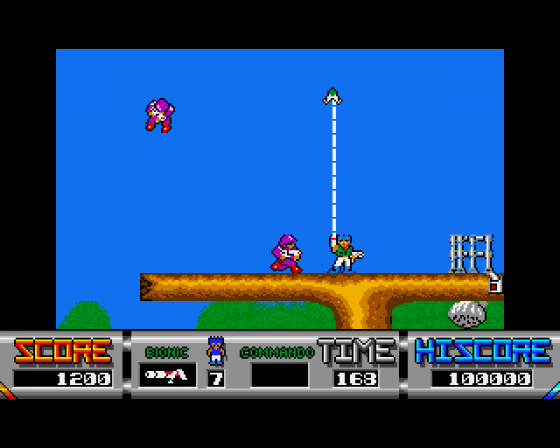 The backgrounds and sprites are passable and the sound is quite pleasant, but the gameplay is crippled by unfair attack patterns right from level one and the worst use of Amiga screen scrolling I've seen to date.

Swinging the bionic arm out half a dozen times just to see a branch does not, in my opinion, make for heaps of playability.

I could do better swinging myself with a bit of clothes line and a tent peg (but that's not advisable at home, kids!). 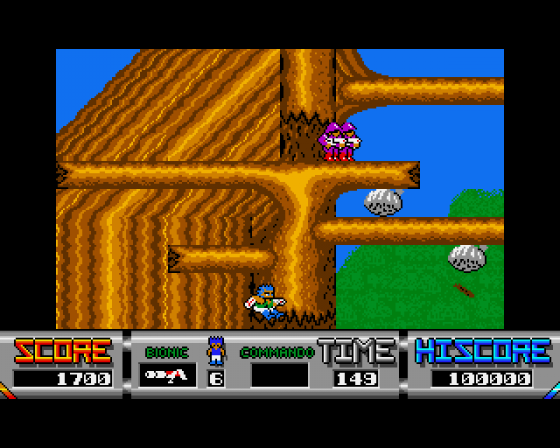 Play the C64 version if you can, but if you can't, that's still no excuse for wasting money on the Amiga version.

What have Go! done to the game that I enjoyed so much on the C64? What aggravates me most is the fact that the tragic ruin of the gameplay is the screen scrolling, which I would have thought was easily accomplished with the powerful graphics hardware inside the Amiga.

Extending the grappling claw to something off-screen leaves the program bewildered as it can't scroll fast enough, so it quickly shunts the screen a few pixels in the required direction and retracts the arm before it can grab something. 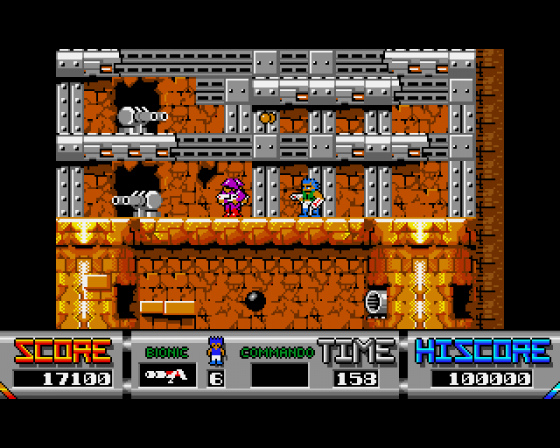 When you finally do get a claw-hold (several extensions later), you've probably been overrun by enemy soldiers who've suddenly appeared from the new screen section.

The bad scrolling also affects weapons collection as shooting goodies frequently drops them into a corner of the screen, so of course, one step in the wrong direction can result in them scrolling into oblivion.

Graphics and sound don't reach the standard I would have expected either - all in all, a very disappointing conversion. 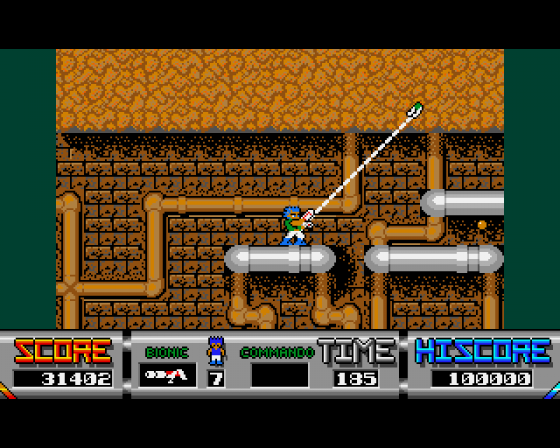 Graphics 69%
Some beautiful backgrounds and adequate sprites, but awful scrolling.

Sound 80%
Good tunes (especially level two), but the Amiga can do better.

Hookability 38%
The going is just too tough from the outset.

Lastability 37%
Five large and well drawn levels, but the process is frustrating and ultimately boring.

Overall 35%
A very disappointing conversion considering the power of the machine.

A very disappointing conversion considering the power of the machine. 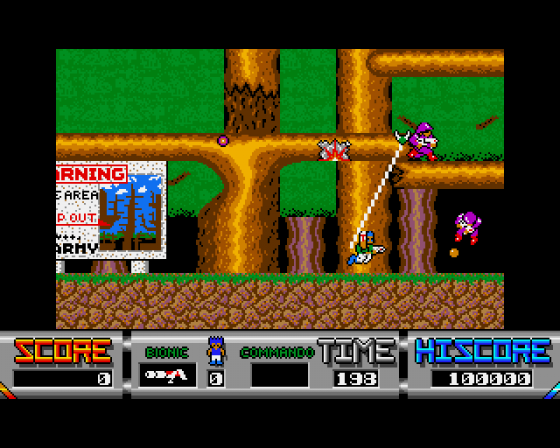 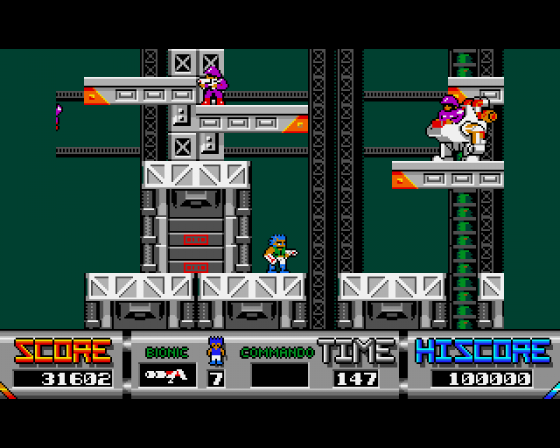 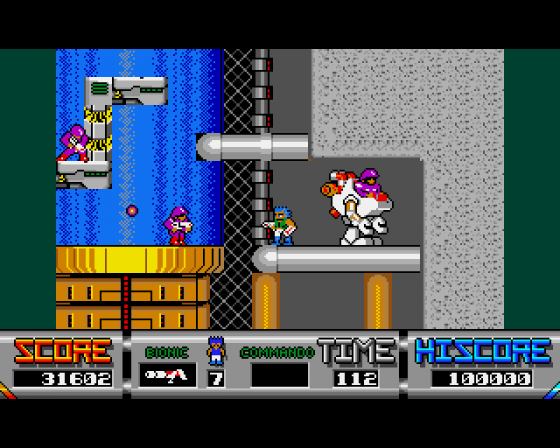 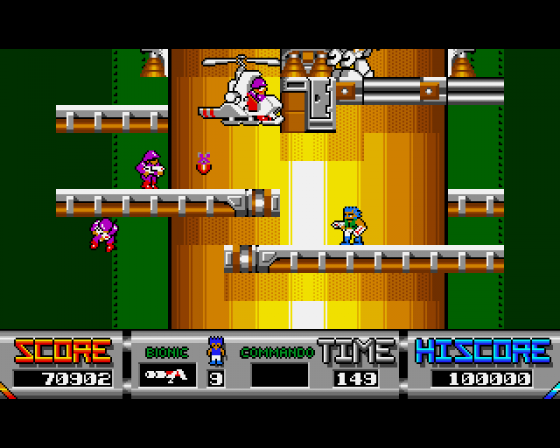