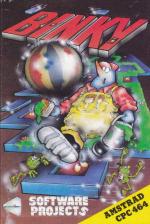 This cross between Q*Bert and Painter games sets you the task of changing the colour of a 3D floor layout by walking over it. There are 21 layouts which have to be painted and the later ones require two or even three coats of paint.

You change the colour of a part of the floor by just walking over it and repeating the action if more than one coat is needed. The trouble is that the floor is floating around in mid air and is populated by some nasty little creatures.

Binky moves quite fast and consequently you have to be very alert not to run him off the edge of the floor where he will fall to his death. The other dangers that await him are little, fat, red monsters, bigger green monsters and some decidedly nasty killer balls. The flat creatures appear on the floor and after hesitating for a moment move in one direction until they hit Binky or run into the edge of the floor where they disappear.

Green beasts are altogether nastier since they home in on you. They appear first as a stationary green circle with a number counting down on them. Once they hatch they make a beeline for you. They can be stopped by running over them before they hatch or guiding to a hole where they fall through. The balls are more intelligent still and will avoid the holes, making life very difficult indeed.

You are told some nice cheat modes to use on the game but for me this seemed to spoil the challenge.

N. "Official" cheat mode spoils the challenge.
N. Frustratingly easy to run off the edge of the floor.
N. Not a very original game concept.