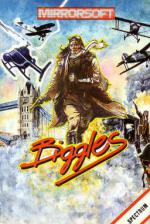 Biggles - bi-planes, caves and secret weapons, Capt W E Johns could have coped with. But a time warp? Biggles in the 1980s? Helicopters in 1917?

W E Johns, the author of the Biggles books, is probably turning in his grave right now.

Biggles the game, like Biggles the movie is a curious concoction of characters and objects all in the wrong time zones. The bizzare plot hinges on a 'hole' in time which unites Biggles with his time-twin, Jim Ferguson. The time tunnel idea functions as a neat link between a number of separate games between which the play flips quite unexpectedly, every time you are killed.

You take the role of Jim, rather than Biggles. He's young, American and definitely from the 1980s. One day, without warning, his Spectrum goes Whooosh! and turns into a Sopwith Camel high above a WW1 battlefield.

Taca-taca-taca-tac. Bullets stream out as Biggle's arch enemy the evil Erich von Stalhein closes in for the kill. A dog fight ensues, the two bi-planes weave about in an in an almost convincing manner. Anti-aircraft shells pumped from tanks below are surprisingly accurate.

Suddenly you're hit. Whooosh! That familiar sinking feeling - the time tunnel again - and you end up in some caves fighting German footsoldiers. It's all very confusing.

This second arcade game gets underway with you trying to make it to the test site of the enemy's secret weapon. The screen scrolls and your stick-like character trots along firing as he goes. Repeater fire in 1917? Surely not.

Grenades can be lobbed, from a discrete distance at enemy pillboxes, silencing their deadly fire. Get the distance wrong and you'll waste your fire.

The enemy are only intelligent-ish. Once you start running forward, they tend to follow, but stand still and they'll mill around, ignoring you completely. If you get killed then it will be by accident and a stray bullet.

You can't last forever, and soon you'll walk into a bullet when Whiz! Bang! you're deposited with Biggles on a London rooftop in 1986. This is the third arcade game and the only one which leaves you weaponless. Here some nifty toe work is needed if you're to guide the dynamic duo to the secret code which enables you to play the final game, a kind of fight simulation on the other side of the cassette.

There is an aim to each of the four games and they have to be completed in order if you're to get that secret code. It's very difficult because just as you feel you're getting somewhere, you're thrown off-course by a time warp. Three symbols, one for each game, lie at the bottom of the screen and disintegrate each time you're killed. The game ends when one disintegrates entirely.

By that time you will have visited the three battle areas several times.

Although the background is clearly depicted the graphics tend to be a little scrappy but the games play well and smoothly and even the Spectrum Beep manages to sound like gunfire.

It's Side Two of the cassette, the final part of your quest, that's the surprise - a neat but simple helicopter flight simulation with an arcade twist. The controls are simple - up, down, left, right, take and drop. The graphics are fairly comprehensive and there is a range of instruments which guide you when landing and taking off.

You can toggle between two maps - I found the radar map which shows enemy outposts and the positions of landing pads the most useful. Flying at an altitude of 500 feet, set a course for your first drop - the allied camp. There you can choose what objects and which of Biggles' mates you're going to take with you. The secret weapon can only be destroyed if you have the right combination. Marie, a secret agent must be found and picked up to guide you to the next location.

The graphics are excellent. When you put the nose of the aircraft down the objects on the ground become recognisable as people, tanks, trees etc. They don't get larger as your altitude decreases, though, so you have to depend on your instruments. When you land, you'll be told if there is anything there for you to take. If not, take off and try elsewhere.

Biggles has something for everyone. For £9.95 you get three arcade games and a pretty good flight simulator. If the graphics are on the simplistic side, the play itself is often very challenging.

The link between the first three sections is unusual and the constant changes of scenery add to the difficulty.

Four games for the price of one. Some tricky challenges make this one of the better film tie-ins.

Four games for the price of one. Some tricky challenges make this one of the better film tie-ins.