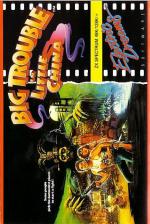 Hyahh! Kawasaki! Origami! Thud! Sorry about that, just practising my lotus blossom eats preying mantis position. That's the one where you do a neck chop, a triple somersault, and pull a machine gun from behind your back and yell "surprise".

Enough of this, let's get on with the game. Big Trouble in Little China was a film that appeared recently - it wasn't too bad, so Electric Dreams brought out a game too. Stands to reason, dunnit. The plot is this - nasty 'orrible mandarin Lo Pan is bored of being spiritual and wants a proper body to walk about in. First of all, though, he has to marry a girl with a fun personality, who's good at parties - oh yes, she's got to have green eyes. Then he has to sacrifice her! Unfortunately, his dippy henchmen kidnap girlfriends of Wang Chi and Jack Burton, so these two brave lads, plus a third called Egg Shen, tootle off into the sewers of San Francisco to find them.

You control all three characters, but life is made easier by the fact that you need to control the leading one, as the others follow after: You start your trail through to levels to face Lo Pan with no weapons at all, although there are some scattered about to picked up. Each player has his own particular favourite - Jack has a gun, Egg has potent magic and Wang has a sword. These aren't easy to get, though, and you've got to be nifty with your fists at first.

The bottom third of the screen shows the characters' faces and there are yin-yang symbols showing your lives and your weapon, if you have one. Your score is also shown which, when the last character dies, turns to zero. Mind you, if one of you croaks, you might as well give up anyway, as you need the combined skills of all three to win the game.

The scrolling is smooth, the animation is nifty - especially Egg Shen's floating cloud, and altogether, it's a pretty good game. One gripe I do have is that the martial arts experts are easy to kill, but the gun-toting baddies are almost impossible to waste unless you have a weapon, and you don't, for most of the time. I also found the sewer monsters hard to deal with. The blurb says you have to jump over them as they can't be killed. Poppycock! You can't jump high enough, and it's easier to walk past 'em anyway. Apart from that though, A Bit Of Bother in Little China is another great game from the lotus blossom eats preying mantis school - ah so!

The sewer monsters are hard to deal with. The blurb says you have to jump over them as they can't be killed. Poppycock! You can't jump high enough, and it's easier to walk past 'em anyway.