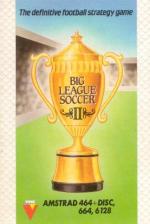 This is the best of the football management simulations on the market and now it's available in disk form it has been given several enhancements that make it even better. It places you in the role of a team manager who starts with his team in the fourth division and has to take them through each game handling team selection, transfers, club finances and then watching the nail-biting highlights as the games are played.

The disk version has a number of noticeable improvements. There is now an FA Cup competition that runs throughout the season and contributes to your managerial record, featuring all the rounds and replays. The 3D highlights of each game have also been improved with different strips available (hoops and stripes), penalties which are saved occasionally and much faster animated action.

After a game there is also additional club news that can be good or bad financially. Another improvement is the ability to keep the team that played m a previous game and not have to re-select it every time. All these features add to the excitement and depth of the game with the only drawback being the added time that accessing the disk drive puts onto the game. If you're a football fan this is a must. If you're not, give it a look anyway.

N. Accessing the disk drive means having some pauses between sections.
N. Football management may not appeal to all.

If you're a football fan this is a must. If you're not, give it a look anyway.