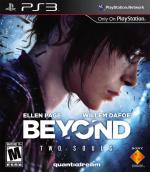 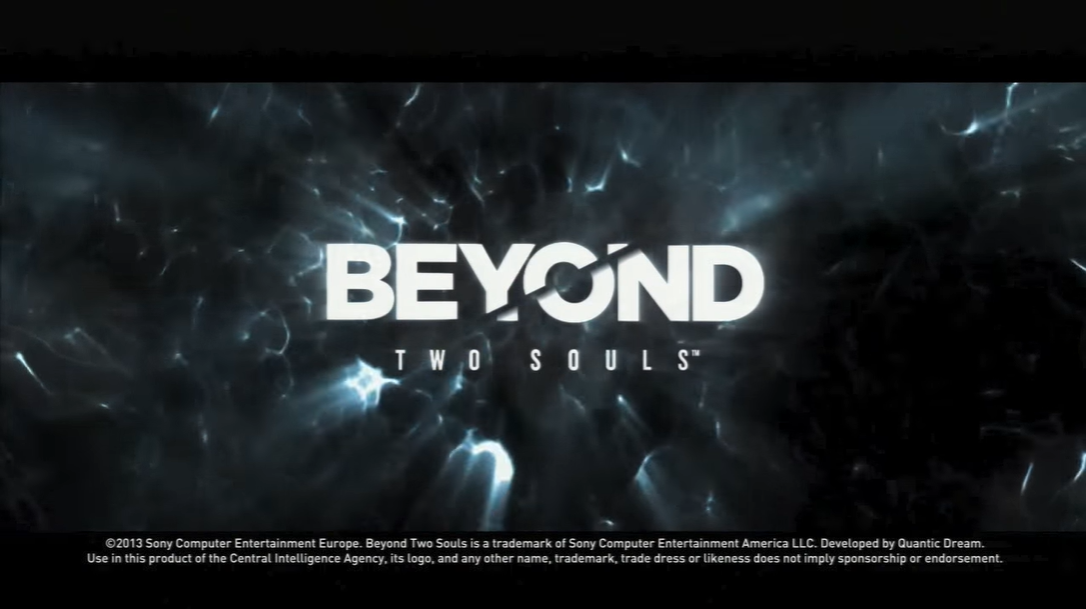 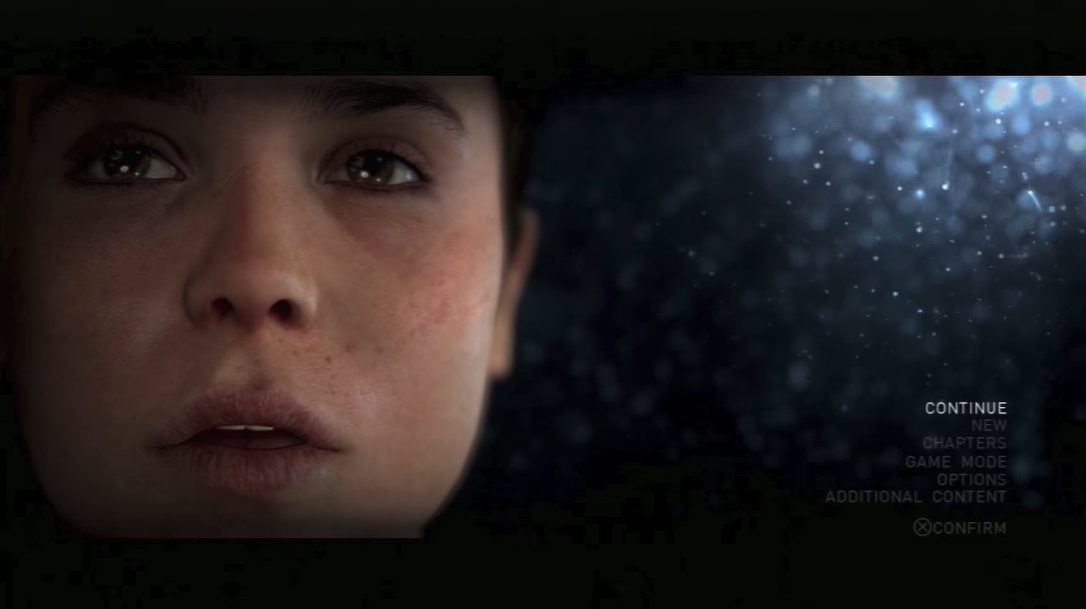 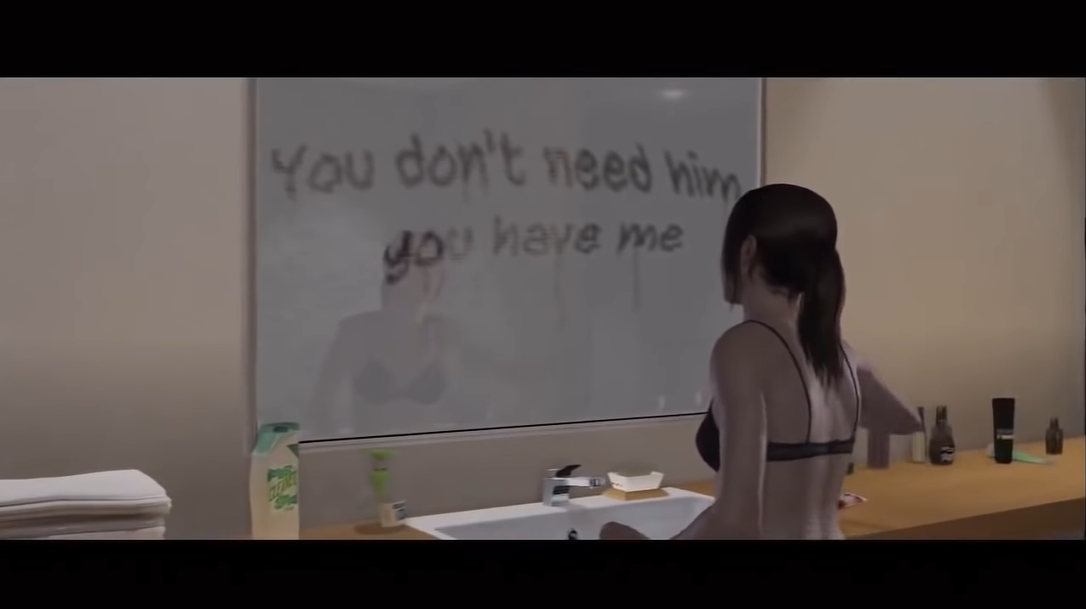 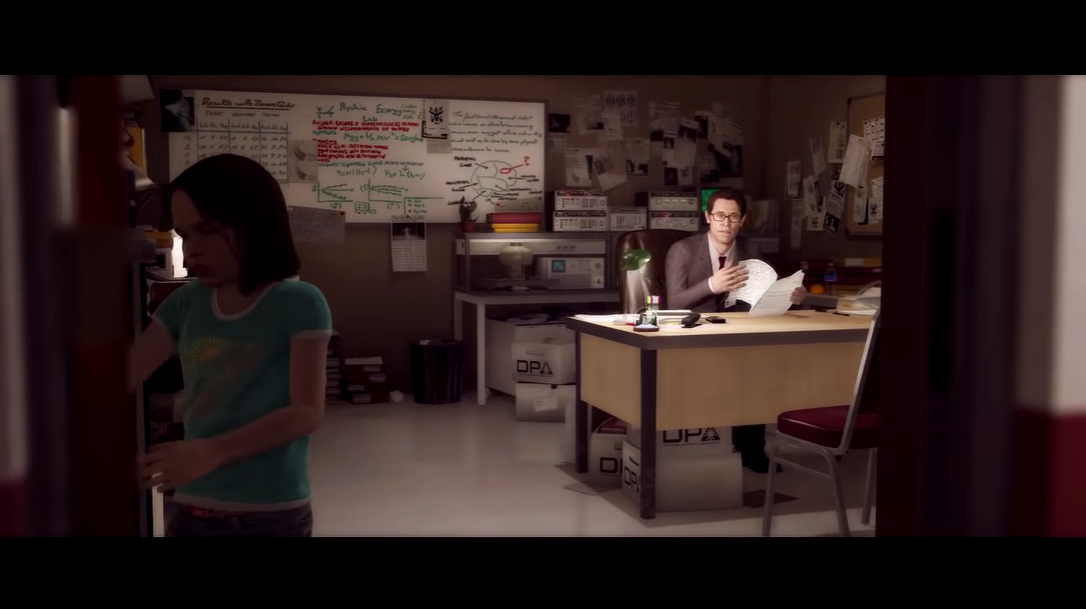 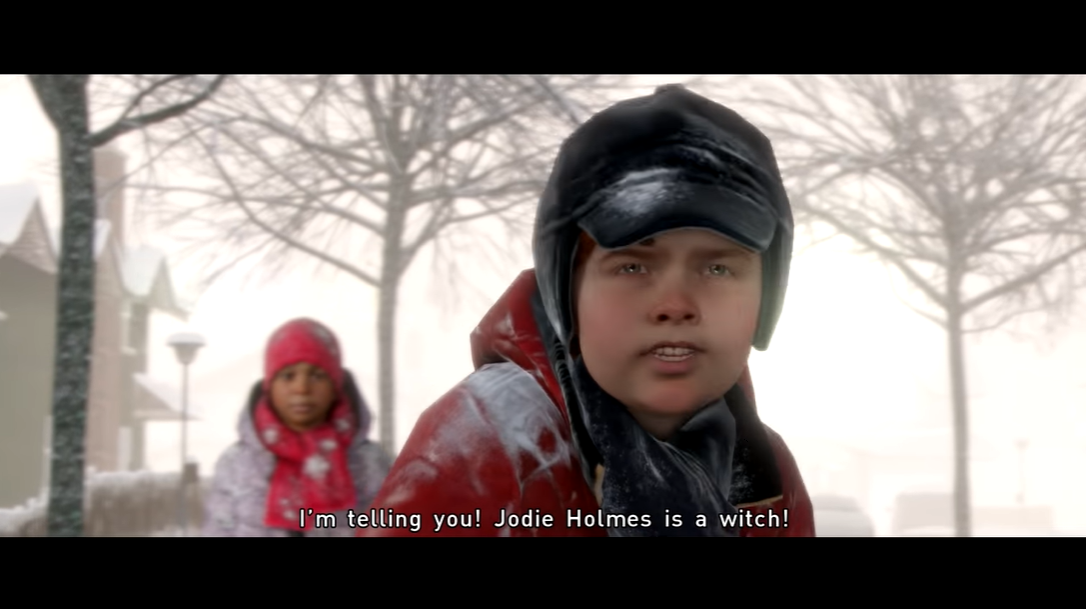 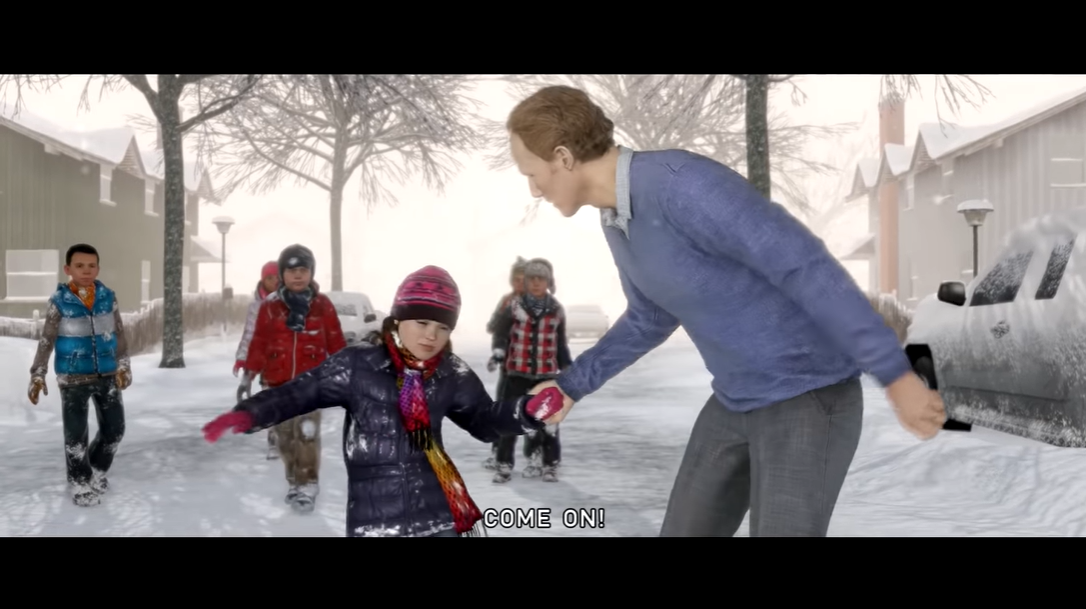 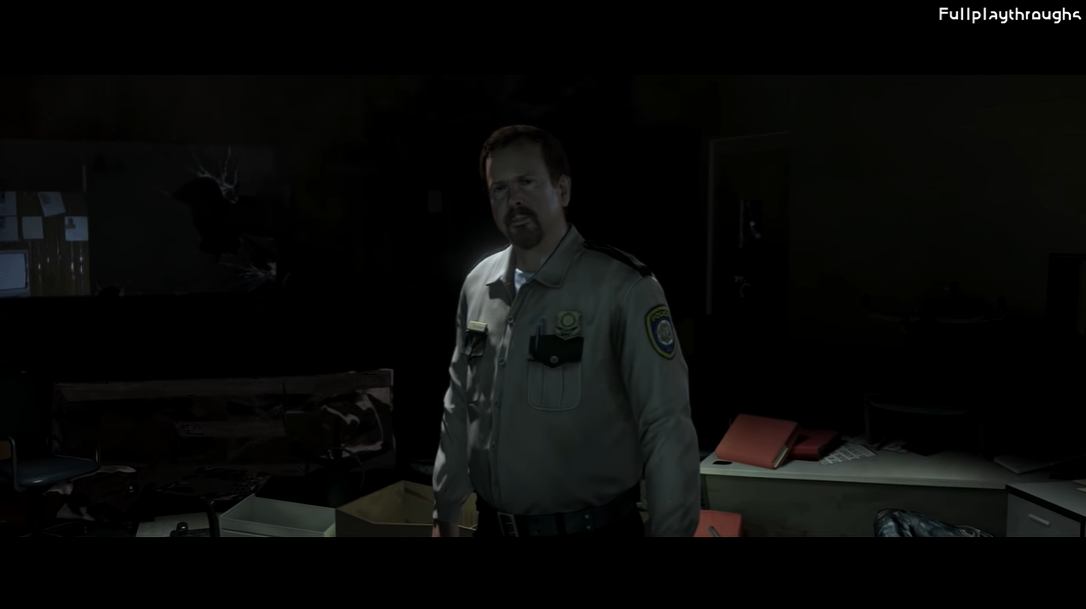 Jodie was born 'different'. She is attached to an invisible entity which floats, balloon-like, over one of her shoulders. The CIA and the US Department of Defense know all about the existence of this entity too, which means Jodie is in for a miserable life of seclusion, experiments and ultimately militarisation. In Beyond: Two Souls, you get to play both Jodie and the entity, and to choose your own adventure.

It's always difficult to review games like this without giving away essential plot details and, in Beyond: Two Souls, really the plot is all you get. This isn't so much a game as a movie - if you take away all the pointless 'tap the X button repeatedly' or 'jiggle R1 and R2 to swim' instructions that occasionally appear on-screen, you're left with very little "interactivity" at all. If Beyond: Two Souls were a movie, it would weigh in at about a twelve hour run time. Some of the sequences are so laughably mundane (you get to control Jodie cooking a meal, tidying up an apartment, taking a shower, packing her possessions into a suitcase, etc) that they would never make it into a mainstream movie because they would put the audience in a coma.

Throughout the game, you make progress, and affect the storyline of the game, by making "decisions". When Jodie is involved in a conversation, she can respond in different ways. However, you don't get to see exactly what she is going to say. Instead you get one-word descriptions of the attitude she will take: Cold, Sincere, Ironical, etc. You tap a different control to elicit her response. How particular responses affect the game is really something you'll never know unless you play it through many, many times. From the start, my personal feeling about Beyond: Two Souls was that Jodie was getting a pretty raw deal from everyone around her, so I had no desire to be nice to any of them. Other players may be a bit more optimistic about Jodie's chances of escape, both from the entity itself and the dreaded Men In Black who want to weaponise it, and therefore find they can respond to their captors with more than a shrug of the shoulders. There's also a love interest, a man that Jodie is really interested in and who you cannot choose her to be uninterested in. However, to be quite frank about it, I considered her interest in him to be borne out of complete desperation than any sort of genuine connection. (Plus the whole #MeToo movement makes relationships where the man has obvious power over the student Jodie suddenly seem very awkward.)

Now, that's not to say that there is nothing to like about Beyond: Two Souls. It's an aesthetically beautiful movie and it's full of surprises. Its opening sequence reminded me of an episode of The X-Files, whilst Jodie's missions for the CIA look like something from a 007 film. The game presents itself in a non-sequential episodic format, meaning you get a chapter from Jodie's life at age 5 followed by a chapter from her life at age 21, and then back to age 3, 15, and so on. This really doesn't work and I'd much rather play it linearly. The piecemeal approach, whilst interesting, is a radical departure from any Choose Your Own Adventure game that I've played before. All it did to me was underline in my mind the fact that "Jodie cannot die here, because I've already played a section of her life after this". For example, the game starts with Jodie on the run in the USA, and later you get to play through one of Jodie's CIA missions, where she and the entity are dispatched to Somalia to take out a warlord. At one point, and this is certainly no spoiler, she considers putting her weapon under her neck and killing herself. Two options are presented - Fire or put the gun back down.

In a linear game, you may well consider this a life or death decision. You, as the player, might wrestle with the bigger questions - what is Jodie's 'gift' for, if not to make the world a better place? Is suicide ever justified? In Fahrenheit (also by QuanticDream), which is linear, there are several choices which can abruptly end the game. Such choices really make you think.

But here, as you've already played through Jodie's life on the run, we know Jodie cannot die, whether she Fires or puts the gun back down is no longer a choice; the answer is predetermined. Hence, the choice is illusory. Some academics might consider that this is entirely intentional, that the game is trying to make us feel as trapped as Jodie, but I don't think I completely buy that. When I recall the Choose Your Own Adventure books I read in my youth, if they had one thing in common it was their linear structure.

Moving on, apart from being instructed to tap certain buttons, Jodie can interact with anything that has a white dot near it. Beyond: Two Souls stubbornly refuses to advance time until certain actions are completed which means, again, these interactions are illusory choices. By tapping the triangle button, you stop playing Jodie and become the entity which interacts with the background in a different way. Jodie, as a physical, breathing human can do everything you might expect. The entity can pick things up, throw things, affect electrical circuits and float through walls, doing everything you might expect from your typical paranormal entity. At first, it seems the entity is a manifestation of Jodie's telekinetic powers (a la Carrie) but you quickly appreciate that this is not the case. The entity is a completely separate thing, a soul connected to Jodie by an invisible cord. It is bound to her, and it therefore cannot stray too far, usually around 10m or so. What it can do is see where the bad guys are hiding, listen in on conversations in other rooms, and lead rescuers to Jodie if she is threatened or in danger.

You never get confused about whether you have control of Jodie or the entity, because the entity floats in the air. However, control of both of them is occasionally very fiddly. Mostly, the problem is with confined spaces - Jodie's apartment, smaller rooms, etc - or when the camera switches to "follow" Jodie as she walks out of one room and into another. You can push the left analogue stick up to walk through a door, have the camera flip around to have her entering down into the next room and suddenly realise she's walking down the screen whilst you're continuing to push up. If you pause and push up she will then turn around and go back. In areas where Jodie is restricted to a particular playing area, venturing to the edge of that playing area will result in her immediately turning around but then facing the edge again, which can result in some quite strange 'loops' occurring.

Finally, there are the quicktime events alluded to earlier. During CIA training, and later on missions, Jodie will get to "fight", by means of the most lacklustre control imaginable. Tap a button, shake the controller, rotate a stick or two... Nice try, but it's not really a game, is it? Indeed, this interactivity completely defeats its purpose, occurring during some of the best and most powerful moments of the story. The Somalia chase scene is rendered behind simplistic buttons instructing press this and shake that... how can we marvel at the admittedly fantastic graphics when they are being smothered by these irritating icons? It's like watching James Bond fight a villain with a load of icons obscuring the action.

If you can sort out its episodic nature, the plot is actually very deep and interesting. It's not spectacular, and the whole premise is weird, but it's written snappily, with the next big change of pace only a few moments in the future. Its boring bits are very boring. Its action sequences are beyond reproach. Whilst it doesn't reward skill, I presume you "get the story you deserve" due to the decisions you make. It's also very addictive. It's even harder to pull yourself away from Beyond: Two Souls than it is to stop binge-watching Stranger Things on Netflix. If you like sci-fi/paranormal/horror movies, playing this is better than watching one of them, and it has an endgame that's quite satisfying. If it had been linear, and if Jodie could actually die, and if she had an energy bar, I personally would rate it better. Then again, it doesn't claim to be anything more than a decision-based movie, and that's what it is. So if you fancy trying to resolve the mystery of an entity attached to Jodie's soul whilst escaping the clutches of the CIA, you won't find a better escapade than this.

Beyond: Two Souls (PlayStation 3 (US Version))