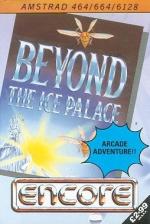 Before you can say 'Resident System eXtension', all manner of beasties start creeping out of the woodwork in this outing from Encore, and go on to wreak all kinds of havoc down on the farm. So logically - if logic has anything to do with legends - the town elders send you, not an army, to sort them out.

So you start the long and dangerous trek Beyond The Ice Palace, hoping to stop this nonsense once and for all. The result is an arcade adventure that takes you through tunnels and into strange lands, littered with the worst things wizards can imagine. Armed only with a single weapon, you run, jump and throw knives/swords/axes to kill people/things/monsters - and that's about all.

The game structure is terminally impaired by the speed of the foes, who move too fast and kill too quickly, so you can never really get into the game. Even the supporting cast of pretty graphics and nice sounds can't repair this damage, although they do try. Some people may find this level of difficulty a real challenge, but most will just find it a frustrating and irritating experience.

In a world crammed full of arcade adventures (Myth's an excellent example) they have to be pretty special to make their mark. Ice Palace tries to be the 'tough kid' on the block, but overly dangerous opponents can never take the place of gameplay, and that's where it's sadly lacking.

Graphically good for its age, but far too tough to begin with.

Staying Power 33% N. The monsters are too strong to maintain your interest.

Tries to be the 'tough kid' on the block, but overly dangerous opponents can never take the place of gameplay, and that's where it's sadly lacking.