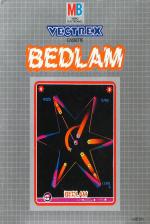 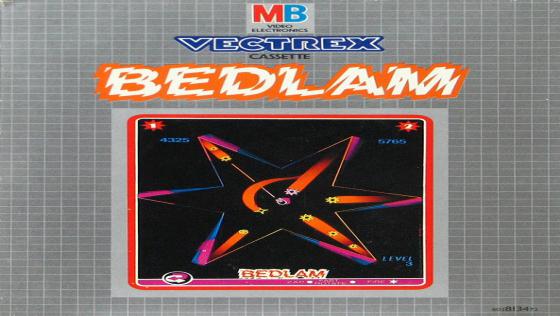 Bedlam is the latest shoot-'em-up for the new Vectrex all in one games system.

Does it need another shoot-'em-up was my first thought! With Web Wars and Fortress Of Narzod just released, and at least a half a dozen others in the existing range a different type of game would have added greater variety to the range.

The game itself doesn't quite come off. Your ship is trapped in a diamond-shaped space. Nasties are coming at you from the corners and you have to rotate and shoot to stop them colliding with you.

When the aliens stop coming a new pattern appears with more spikes and faster aliens.

There are three gameplay options. As well as the basic game, you can also add complicating factors like making the shape rotate left and right and also making it shrink towards your ship.

When the game gets really hectic you also have one smart bomb which you use to wipe out all the nasties on screen at that particular moment.

The game would be immeasurably improved if you could move your ship instead of merely being able to rotate.

If you want a new shoot-'em-up for your Vectrex I would recommend Web Wars or Fortress Of Narzod in preference to Bedlam any day of the week.

This is not one of the better games for the Vectrex. I would recommend Web Wars or Fortress Of Narzod in preference to Bedlam any day of the week.