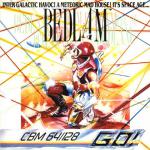 The combat arena vertically scrolls over sixteen space stations and two players can participate sequentially or simultaneously, in which case they can bounce each other around the playing area.

Space station surfaces comprise both lethal and harmless ground installations. Death results from contact with force fields, radars and guns; collision with pyramids is not fatal but bounces the ship perilously around the screen. Letters are found beneath pyramids and are collected to activate bonus features: limited invincibility, a smart bomb, an extra life and a teleport.

Flying over the teleport launches the player into one of the bonus pinball games. If a pinball is released, the triggers fall under the player's control, the task being to keep the pinball on the screen whilst avoiding contact with it. Features such as holes and grabbers activate the scoring amplification circuit, multiplying all scores for the current pinball machine and the next space station. Losing a life on this section results in the player being sent back to the start of the previous level.

Nowadays, a game like this selling for a tenner has to be pretty exceptional if it's going to impress prospective purchasers. Bedlam's misplaced 'Pinball' game tries to make a standard - very standard - blast-and-pick-up game into something new, but it can't save it from the annals of averagedom.

The shooting action has little in the way of innovation or variety, and the pickups' aren't at all conducive to creating Bedlam, feeling more like a token effort at the ubiquitous progressive weaponry technique.

Bedlam exhibits nice graphics in the game and on the title screen, and sound is competently used, but it didn't arouse my passion for blasting.

Let's face it, these days a vertically scrolling shoot-'em-up has to be really special to make any impact on the market. Bedlam tries a new slant with the addition of the pinball section, but really hasn't enough sparkle or flair to make it stand out from any of the others in the genre.

The gameplay is very straightforward, and there are a couple of annoying quirks, like the lack of progressive weaponry and the fact that you're often sent all the way back to the beginning of a level.

The backdrops are bland to say the least, and are only partially redeemed by some of the smart enemy sprites and motherships. Take out the useless pinball section, and you're left with something you could knock up on the Shoot-'Em-Up Construction Kit.

My first reaction to this game was one of utter indifference: its one redeeming feature is the novelty pinball section, but even this is too limited to make it worthwhile.

There are several nagging faults: the collision detection is occasionally tight the firepower is annoyingly limited and can't be increased, and there is very little inter-level variety.

The backdrops are reminiscent of the kind of bland bas-relief characterised by poor budget games, but some of the sprites (particularly the motherships) are very pretty and decently animated. The title tune is reasonable but the in-game effects are so standard it becomes annoying to listen to them.

Bedlam lacks sparkle in all departments: it isn't abysmal, but it's far from the standard required of the asking price.

Graphics 51%
Backdrops vary from bland to reasonable, with sprites to match.

Hookability 55%
The game's novelty element saves it from immediate tedium.

Overall 40%
An overpriced and very undistinguished shoot-'em-up, destined for obscurity.

An undistinguished shoot-'em-up, destined for obscurity.