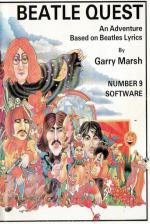 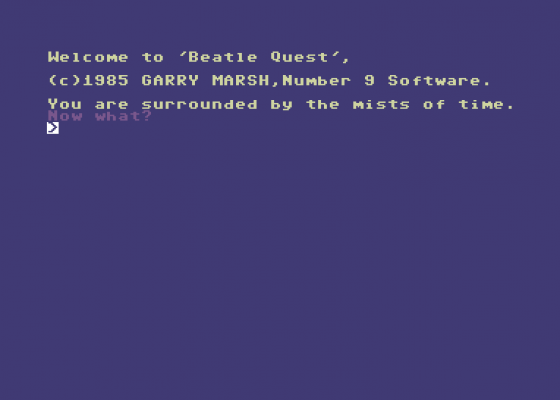 This adventure (written on The Quill) has nothing in common with the creepy-crawly type of "beetle", but an awful lot to do with legendary pop group The Beatles. For those too young to remember, The Beatles were the most popular band of the 1960s, causing mass hysteria wherever they went and later becoming the first band to be awarded the OBE. Sounds like a good theme for a game...

Beatle Quest is a large adventure, with around 150 locations. After the opening scene (set in the Mists of Time), you wake in a seedy bedsit in the heart of Beatle Town. You soon find yourself taking a bus to Penny Lane (hope you have as much fun with the sheep as I did) [Come again? - Ed], visiting the old school, taking a trip to the circus, riding on the helter skelter and visiting many more weird and wonderful locations (recognise 'em, pop pickers?).

A must for Beatles fans, perhaps it's a little tricky for younger adventurers as all the puzzles, plots and counter-plots relate to Beatles song titles and lyrics. Most of the location descriptions are taken from Beatles lyrics, and a knowledge of their extensive range of hits is almost essential to completing the game. Featured songs include When I'm 64, Yer Blues, The Continuing Story Of Bungalow Bill, With A Little Help From My Friends, Love You Too, Strawberry Fields Forever, Lucy In The Sky With Diamonds, SGT Peppers Lonely Hearts Club Band, I Am The Walrus, Penny Lane, Glass Onion and The Fool On The Hill. Getting into the game is extremely difficult at first, as after the first few moves two of my most dreaded hates reared their ugly heads - being told I'm hungry and the evil Sudden (and Illogical) Death Syndrome, the bane of bad adventures. You only have a few moves to solve a particularly nasty problem before 'Maxwell's Silver Hammer comes down on your head' (more Beatles lyrics). This puzzle is so bad I'm going to break my own rules and print a clue within a review, albeit backwards. In the MOORHTAB, you must MOOR MCRAES to find an item which (and don't ask me why!) keeps death away. There's another sudden death in the bedsit, where you find a beautiful girl sleeping. I couldn't find much to do with her apart from something really naughty, for which I got killed! Serves me right I suppose, but when you're stuck you should try everything.

The need to eat comes into play after very few moves. You're told you have "the hippy, hippy shakes" - doing something unusual to the telephone should help you out there. If you do everything right within the allotted number of moves, you'll soon "Picture yourself on a boat on a river, with tangerine trees and marmalade skies". It's from this point that the game opens out.

First released way back in 1985, it's now been re-released by Garry Marsh of Number 9 Software. Garry's obviously a real Beatlemaniac and there's no denying a sound knowledge of Beatles lyrics helps the player no end, though I only know a few myself and I managed to complete it eventually.

I've mixed views on the adventure as a whole. On one hand I enjoyed parts of it very much indeed, but on the other, two sudden death routines right at the start and the limited number of moves allowed to sort out the problem almost made me throw it through the window! It's a tough adventure, and because of the Beatle theme it could prove a lot harder for non-geriatric adventurers. However, if you young 'uns want to see how we oldies cut our adventuring teeth way back in 1985, then try it!

A tough adventure... Because of the Beatles theme it could prove a lot harder for non-geriatric adventurers. 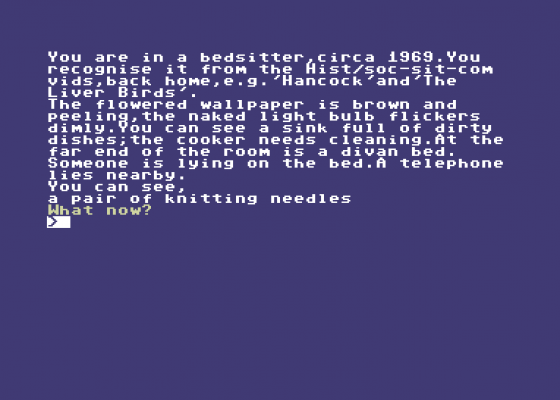