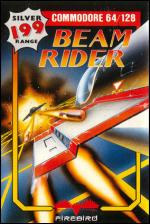 A huge beam matrix has formed within the vicinity of Earth and beamer ships are launching attacks on your home planet. You have been sent on a mission to infiltrate the matrix with a single aim in mind: the annihilation of all enemy craft.

Your vessel appears at the bottom of the screen, with the matrix disappearing into the distance in front of you. Control is achieved via joystick, with movement limited to hopping left and right from one beam to another.

There are seven different types of beamer ship to be dealt with, each with an individual attack pattern. The most important are the white saucers, 15 of which must be cleared from each screen before the next can be accessed.

Defending alien craft attempt to remove your ship by kamikaze attacks - collision with your vessel being fatal. Attacks become faster and more frequent as the levels progress.

Contact with yellow rejuvenators adds another ship to your reserve - however, if shot they turn red, and collision then proves fatal.

When the necessary fifteen saucers have been destroyed, the Sector Sentinel appears, making its way across the top of the screen and guarded by swarms of green suicide ships. Your vessel charries three torpedoes, launched by pushing the joystick forward. A direct hit from a torpedo causes the Sentinel to explode, signalling the bonus sheet to appear. The bonus awarded is according to the level and the number of ships remaining.

The game may be played by one or two players, with the mission beginning from sectors one, five or ten, according to preference.

I can't say I'm thrilled with this ageing shoot-'em-up. The basic graphics and white noise sound effects don't inspire, and the repetitive gameplay bores after a few sessions.

The action may be fast, but shooting sprite after unimaginative sprite fails to spark any enthusiasm, and after a few plays the desire to go and play something else is huge.

Okay, so this is budget-priced, but there are plenty of other shoot-'em-ups in the range which put this to shame.

I can see why this was popular when it first came out on the C64 - and I'm sure it will be in even more demand now that it's at a budget price.

The basic concept is very simple - and this is what makes Beamrider so addictive. The graphics update smoothly enough and give a perfect view of 3D perspective.

Control is accurate and extremely responsive. With a budget price there is no excuse for missing out on this old favourite.

Another of my early favourites gets a new lease of life thanks to Firebird. Beamrider is a very simple shoot-'em-up with strong "Space Invader" overtones. Graphically, it's nothing to shout about, and it is starting to show its age, but I still find it enjoyable.

The main reason being that it's one of those games which is not limited by the program: it reacts as fast as you can. On later levels the action becomes chaotic, and really gets the adrenalin pumping, making this a worthy addition to anyone's blasting collection.

Lastability 48%
Little variety, although the level of difficulty is well graded and the pace increases with proficiency.

Value For Money 66%
Lots of cheap blasting on offer.

Overall 51%
An ageing but playable shoot-'em-up, well suited to the budget range.

An ageing but playable shoot-'em-up, well suited to the budget range.