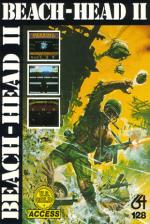 This is the follow-up to the very successful war game, Beach Head. In terms of technical input and quality, the authors have learned a great deal and this is a huge improvement, rather than just a boring sequel.

The package comprises of four episodes in which the hero J P Stryker does battle with the evil dictator. The parts have some continuity in that the first three parts portray different stages of a mission to rescue some prisoners. In part one you land your paratroopers and advance on the dictator. The second part involves getting the prisoners out of the prison and avoiding tanks and other perils. Next you bring in the helicopters to airlift the prisoners and finally, the fight to the death with the dictator.

After a main segment has loaded, the subsequent parts are loaded as required. You can play the part of either protagonist or you can play against a friend. Each screen uses bit mapped backdrops and the quality of graphics is high. The animation of the figures is particularly good and the whole effect topped off with a generous dose of high quality speech. The games are tough with the computer giving you a real hard time.

Overall, good high quality game needing both skill and brains which will keep you glued to your machine for many an hour. I found it not entirely to my liking, but then again my preference lies elsewhere. If you liked Beach Head, you'll love this one.

A good high quality game needing both skill and brains... If you liked Beach Head, you'll love this one.