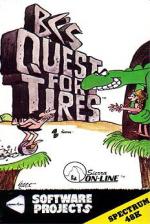 BC's Quest For Tyres is set way back during the stone age and puts you in a sexist 'rescue the girl from the baddy' situation. You play Thor, a caveman type whose girl 'Cute Chick' is being held captive by the Hungry Dinosaur. You've got to get on your stone monocycle (must be flipping painful) and trundle your way across the hazardous Neanderthal landscape to get her back.

The game is similar to Hunchback, but constantly scrolls rather than flicks from screen to screen. When you start, the game is pretty simple there are a few potholes and boulders on the road which have to be jumped. Soon you get to the forest and low hanging branches have to be ducked under and sticks on the ground have to be jumped over. Needless to say if you happen to hit any obstacle you come tumbling off the granite unicycle, hit the dust and see a few stars. Crashes also cost a life, and you start off with four.

After the first forest you have to cross a river by jumping across the backs of four swimming turtles, using them as stepping stones. Being of a lazy disposition, the turtles are constantly submerging. Getting your timing right is critical, otherwise you could find yourself pretty much in deep water and end up with one life less. Just in case you find bouncing across the turtles too easy, Fat Broad sits on the other side of the river and waves her club about. If her club is down when you reach the bank then you'll fall back into the water. "Jump sucker" she keeps urging you in a speech bubble.

After that little escapade comes a steep uphill climb. Rocks bouncing down the slope and potholes make the going pretty tough, and it gets tougher on the way down, with low flying boulders from a volcano adding injuries to insult. As you trundle along a bird flies down this is yer actual friendly Dooky Bird, who's prepared to carry you across the gaping lava pit if you can jump into its talons at the right moment.

Another hill, this time with a crevasse at the bottom, and another river crossing to make with the Hungry Dinosaur standing guard instead of Fat Broad, then it's into the dinosaur's cave. Jump and duck under the stalactites to complete this last run, then you get to your babes, Cute Chick, and live happily ever after ... For at least ten seconds, anyway, whereupon the silly girl is stupid enough to let herself be captured by the Hungry Dinosaur, and the whole problem starts over again.

Points are awarded for jumping over or ducking each obstacle, and double, treble and quadruple points can be earned by pelting along at high speeds. Thor's unicycle must be motorised it can do up to 80 mph, with the speed shown on a digital speedometer at the bottom of the screen. You can accelerate if you want to 90 for points, or slow down a bit on the trickier sections if you wish. Fortunately, in Neanderthal days, fuel wasn't a problem...

Software Projects have done a good job of converting this one from the Commodore and BC is still a pretty loveable character. I loved the way he bounces and bumps over all the obstacles in his path. The stages that you encounter are not too long and I felt that I'd have a better chance of completing them next go . . . which helped get me addicted. Technically the graphics are quite clever, if a little uninspiring. Quite a challenging game to start, but could get repetitive quickly.

I first saw this game months ago on the Commodore and then it struck me as being pretty abysmal. The Spectrum version is a reasonably good conversion - just as bad as the 64 version. The graphics are pretty bad, but the scrolling, it must be said, is very good. The one good point about the game is that it is very easy to play, although this does knock down the addictive qualities. Overall it's very poor and I hope Software Projects have more luck with Willy Meets The Taxman.

What a strange game. At first this game seems very poor, and it's almost as if it hasn't been finished: there's no sound, for instance bar a ticking noise. It's hard to describe what's missing... After a few goes, however, the game began to grow on me and I was really getting into it after an hour - until I discovered that it's not as hard as it should be. Graphically this game isn't outstanding, although I did like the way the mountains move more slowly than the ground and sky. A lot of attribute problems mar what neatness the graphics have.

Graphically this game isn't outstanding... A lot of attribute problems mar what neatness the graphics have.