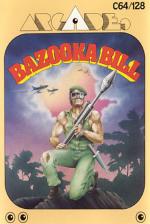 Meet Bazooka Bill - one man army and all round Rambo type. He's the star of the first release on the new Arcade label - Melbourne House by another name.

And it's a cracker OK, the boring ones among will look at the screen shots, put on the voice of Neil from The Young Ones and say: "Hey, but it's just like Green Beret." But that's where you are wrong.

Bill's mission is pretty simple. He has to use all his fighting skills to reach the island in the South Pacific where General MacArthur is being held captive by revolutionary forces.

He starts the game in the city, totally unarmed - except for his bare fists, which he uses to good effect. A giant fist appears from BB's muscular frame and knocks down his assailants as they come at him from all sides.

Soon he comes across a knife which he can use, then later other weapons come to hand - machine guns, flamethrowers and bazookas - his favourite!

You select weapons you've collected by pulling the joystick back and hitting the fire button. Quick manipulation is essential if you find yourself in a tight spot.

If you stick to ground level you'll soon notice that you've been running around in circles. You've got to get up on the upper level if you want to reach the airfield where there's a jet, waiting for you to pinch it and fly to the islands.

The first bunch of enemy troops you meet simply shoot at you and there are helicopters dropping bombs which you have to avoid as well.

At the airfield you have to fight off kung-fu kicking guards and climb aboard a jet which will take you into the dog fight sequence.

Fly your jet through squadrons of attackers fighting them off. Easy for veteran Sanxion and Uridium players.

Then it's off to do a bit of island hopping - with more firefights on the ground and in the air to keep you busy until you reach your objective.

If you lose all five lives the game gives you the option to start again where you left off - if you are quick enough to beat the ten second countdown and hit the F5 key in time! Why can't all action games have an option like this? No more boring back to the beginning blues here. The bad news is that you don't get to keep all the weapons you've collected!

Bazooka Bill is an action packed, addictive, arcade blaster. The graphics are big and butch enough for any would-be Rambo, and it doesn't take itself as seriously as Green Beret either. The great music and sound effects are the icing on the cake.

Don't be put off by people who tell you you've seen it all before - just grab the joystick and make your own mind up. And if you aren't still battlin' it out with Bill days later, I'll eat my tin hat.

Don't be put off by people who tell you you've seen it all before - just grab the joystick and make your own mind up.