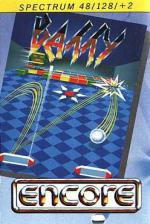 Hello, hello, hello, wossall this then? Haven't I seen this aforementioned Batty somewhere before? In fact, is this your ca, sonny?

For indeed, YS's best ever cover game has reappeared on cassette at a bargain cheapie rate. Well, it's a bargain if you haven't got the game already, which many YS readers probably have, but for those tragic, unfortunate readers who missed out, here it is again in its full glory. Originally deemed unreleasable by Elite because it so resembled Arkanoid, it's a devilishly addictive Breakout variant with 16 vicious screens. Only the most skillful gamesters get past Screen Five or so (another way of saying that I never quite managed it), but that won't stop you trying. Superb colourful graphics, speedy but consistent game play and thoughtful presentation make for a classic £2.99er. If it's not quite a megagame, that's because Arkanoid: Revenge Of Doh came along afterwards and did it even better - but then you might say that without Batty, that itself would never have happened. Cracking stuff.

It's not quite a megagame, that's because Arkanoid: Revenge Of Doh is even better - but it's still cracking stuff.