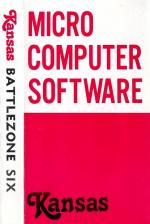 Games produced by software house Kansas were only ever available by mail order and came in uninspiring standardised boxes; the combination did little to foster any urge to buy their arcade games and the result is this game is one of the hardest titles to find in the Electron world. [Their adventures fare only marginally better. - Ed] This will be the first review of Battlezone Six you'll have seen.

Described in mail order literature as "the ultimate Zap game", the non-existant scenario/instructions with the game itself immediately make it a mindless machine code blasting affair. You control a circular base that looks like an eye with tentacles, and are situated in the centre of an almost full-screen window with the intention of shooting any other sprite that moves, with your infinite supply of bullets.

The game is unlike any other - no bad thing - and, rather than blast a set number of 'baddies', you play until each screen's timer bar runs down to zero. In the playing area itself, you begin each of the 100 screens alone. You can move left, right, up, down and diagonally with the correct combinations of the standard Z, X, * and ? keys and fire with RETURN. Your bullets always travel in the direction you are travelling so, for example, Z, * and RETURN will send bullets off at 10 o clock until you release * (when they will change to 9 o clock). This way of controlling the bullet flow results in your sprite moving constantly back and forth across the screen.

Also moving around the screen by now will come the decidedly hostile "things to shoot". These take on a variety of guises, from flashing dandelion bulbs to tiny billiard table bombs. Some (standardised gun sprites) skate around the outside edges of the window clockwise then anticlockwise. Some (lightning bolts) bounce around "Frenzy lepton-style". Others appear, pause and then explode if not hit, sending shrapnel in all directions. Yet more bob about aimlessly. As you progress through the screens, more and more appear at the same time as well as new varieties. The game also gets quicker and quicker.

Generally, within ten seconds, the empty screen has descended into anarchy, or even the Battlezone of the title. (But why Six, we wonder!) The constant manoeuvring of your sprite in order to shoot, more than often leads to you coming very close to whatever you're trying to hit. Make contact with it, or a bullet loosed toward you, and you'll endure a fantastic Planetoid-style explosion and be sprayed over the whole of the playing area!

As the game is set in Mode 2 and the use of colour optimised, all lightning bolts, guns, bombs, aliens and bullets look very slick. The execution speed though is below par. On a standard Electron, the speed of the first screen betrays the jerky movement of all the characters, including your base, spoiling the imagery; on a Turbo Electron, execution whizzes along at such a pace as to make the game far too hard. Now, because the game's author, Robert Turner, has implemented a speed faster/slower option, this can be easily overcome. It's a bit fiddly to change though as you must pause the game, press S, type a number key then restart it.

We now come to what seems a very strange concept for an arcade game: the ability to save your position. By pausing, then pressing FUNC-1, you will leave the Mode 2 screen completely and see a small Mode 4 menu from which you can save the high score table, your position, both, return to the game or catalogue a tape. You get a similar menu with FUNC-0 for loading data back in. Going back to the game pits you in precisely the same predicament as you were when you paused it; even bullets and aliens are reproduced exactly as they were!

This is a surreal addition to a game of this type; interesting to see and use but somehow not quite qualifying as a rival for the password systems seen in similar titles (eg. Anarchy Zone by Atlantis). Note that you must save any data to tape (even on the disk version) as the tape system is enabled via machine code when the program executes.

There is also a sound on/off option executed with the pause facility; and whenever pause is enabled, the border flashes constantly. With the high score table superimposed on top of a demonstration battle, there is some pretty impressive machine code at work in this title and it even comes complete with snappy little introductory music and credits. And if the going gets too tough, with the save and a shield option, making you totally invincible for ten seconds, the odds against you always being wiped out on the fourth or fifth screen become quite neglible.

Unfortunately, despite new "things to shoot" appearing quite regularly, the game really lacks imagination and becomes monotonous. With 100 screens to get through, completion - even allowing for advantageous saves and reloads - will take a hardened player days if not weeks, and the repetitiveness of each screen will not tempt many to try. That said, if you want a mindless and unique shoot-'em-up with a professional edge, it's worth a shot. If you can find it.

If you want a mindless and unique shoot-'em-up with a professional edge, it's worth a shot.