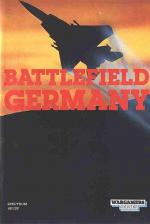 A nightmare scenario of the near future

Battlefield Germany is a full scale simulation of the war everyone hopes will never happen, a war between NATO and the Warsaw Pact.

According to the background information, it took just a year for world events to escalate into a global conflict. Following victories by Iran, Iraq finally crumbled and was followed by Islamic governments in neighbouring Syria, Libya and Egypt. Israel is next. America responds to Israel's request for aid and sends troops. The Soviet Union objects and an American carrier is mysteriously sunk. As the Superpowers collide, troops build up in Western Europe, 17 June 1989 the Warsaw Pact launch their offensive.

With one finger hovering over the nuclear "button", you must command the NATO forces to halt the Russian advance or take either side in a two player game.

Be warned, this is definitely an enthusiasts wargame featuring an incredible number of infantry, mechanised infantry, tanks, paratroops, helicopters and even mountain infantry on a massive scrolling map of Central Europe. Luckily, a small map in the top right hand corner of the screen lets you see the way things are going as it gives colour-coded territorial map with the units represented by flashing dots. On the main map, more detail is available with the forces represented pictorially with further information available when the unit is selected with a cursor.

The game itself is played over either six or twelve turns that can each take about an hour! Each turn consists of two phases, the supply phase (done automatically by the computer) and the action phase when you can move and fight to gain territory.

The computer opponent is tough, with any mistake ruthlessly punished. No quarter is given as the red hordes sweep to vistory.

The victory point table that determines the winner and the level of victory depends solely on the expanse of the Russian advance (accepting that it can't be stopped!). Unless you're an accomplished wargamer used to the hexed maps of board games and possess almost total concentration, you have little or no chance of winning. Here at last is a real challenge for the experts, beginners should cut their wargaming teeth on Tobruk before they try out this one.

Here at last is a real challenge for the experts,; beginners should cut their wargaming teeth on Tobruk before they try out this one.