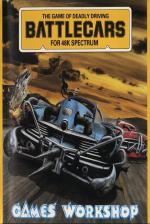 Games Workshop have chosen to implement one of their board games for their move into software, but the original game, despite years of work, was less than satisfactory and the computer version can most kindly be described as overambitious.

Battlecars are armed and armoured cars in which you can either race or fight the computer of another player. There's a selection of differing off-the-shelf behemoths or you can use a Designer program to customise your own, with features like autosteer, powerbrakes, turbochargers or gunnery computers, while the weapons range from lasers and flamethrowers to mines and spikes. Three venues are provided: a duelling area, the Autodrome, a circuit and a town. Once started the screen displays three real-time windows, one for each car and an overall map of the area showing positions, plus vehicle displays, fuel, speed and damage or weapons. So far, so good sounding, but it's the controls that break the game.

Each battlecar has six steering functions, four weapon controls, throttle and brakes and an amazingly uninformative overlay is provided for each end of the keyboard. That's right - in the two player version you can take one end of the same Spectrum keyboard! This hi-tech is too much! Playing solo against the computer you would, eventually, reprogram yourself well enough to have quite an enjoyable game, but I really can't see it as a two-hander.

There's a selection of differing off-the-shelf behemoths or you can use a Designer program to customise your own... Unfortunately, the poor controls break the game.