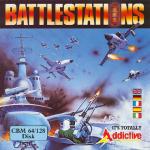 Cue the klaxxons! Cue the square-jawed English actors! Yes, it's wartime again, folks, and 'The Enemy' are getting things off to a flying start by launching a pre-emptive airstrike on your moored battleship. This is no time for heroics, so abandon ship!

Unfortunately, the heroic First Officer has tied you to an anti-aircraft gun before making his own escape, so it's up to you to save your ship and yourself from a one-way trip to Davy Jones' Locker (whatever *did* happen to the Monkees?).

Damaging government properly is a serious offence, so rotate your gun, sight up the enemy, then squeeze the trigger before they can drop their load! A Radar scanner is provided for your convenience, and you are also given a diagram of your ship to show the number of holes currently helping you sink.

I found this almost fun, but only because it reminded me of an arcade game I used to play back in 1980. It's a shame that gameplay isn't a lot more varied, as that would earn Battle Stations much more respect.

Unfortunately, shooting wave after wave of planes which fly in perfectly straight formations isn't my idea of fun nowadays. The Radar and damage indicators are useful touches, but they aren't enough to arouse much interest when they have such weak gameplay to contend with.

Battle Stations is not without its merry moments, however, and probably the best is watching the tiny blue sprites leap off the ship when it sinks. Well, *I* laughed...

I remember playing a game called Bomb Alley years ago on the BBC, and it was a lot more playable than this. At least it gave you some chance of shooting the planes down, which Battle Stations doesn't.

As soon as they appear, you know that they're going to drop a bomb on you. The background of clouds is OK, and the scrolling is smooth, but the planes are bland and boring, as is the land.

Come to think of it, that doesn't matter, because the game's rubbish. If you see it, avoid it.

Presentation 70%
Well presented on screen, with lots of useful instruments.

Graphics 55%
Adequate representation of nearby landscape, but aircraft sprites are small and undetailed.

Lastability 30%
Not much to keep you playing after the first couple of goes.

Overall 35%
Will probably sink without trace.

Will probably sink without trace.