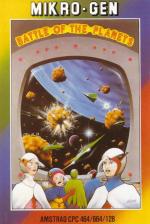 The first two things you'll notice about this cartoon inspired game are the stunning vector graphics and the pitiful lack of helpful instructions. It's based on the cartoons starring the G-Force in their battle against the forces of Spectra. The game however has very little relevance to its origin though, and is basically just a shoot-'em-up.

The opening titles and music look and sound nice but pale into insignificance when the game graphics pop into view. These consist of some of the smoothest and fastest vector graphics I've seen! The idea of the game is to protect five planets against the attack of Zoltars (the evil, nasty, horrible bad guy, OK?) forces both in space and on the planets. You won't find even *that* in the instructions but basically it just means shoot everything in sight.

You start in space near to one planet where the only other things present are enemy ships and a warp gate. The gate is used for getting to the other four planets but these merely have a different type of enemy-ship to fight. The ships can be destroyed by repeated hits with a laser or by the more effective, but harder to aim, neutron torpedoes. This action is very reminiscent of 3D Starstrike, with the laser cursor being moved around the screen although it also controls the direction of the ship's movement.

The ships can shoot back though and you need to watch several indicators that could lead to G-Force's downfall. Shields are the most important and must not be allowed to reach zero, but fuel will also run out and both will have to be replenished after a few dog fights. This is done by descending to the planet surface where a new combat can take place.

There is a certain amount of life on the planets that has to be preserved or once again the ship will be destroyed. It is reduced by landers on the planet surface so that at the same time as picking up fuel and repairs you have to blast the tanks and other vehicles that roam the surface. The cursor is the same as the space scenes but against a mountainous background and with lines moving down the display to indicate forward motion.

Points are scored for every craft destroyed and the game continues for as long as you can avoid losing your one and only ship. There are five different information display boxes that can be called up: shields, power, planet, torpedoes and lasers, all of which indicate when their status is dangerous to your health.

The gameplay is simply a matter of staying alive for as long as possible and killing as much as possible. There seems to be no end to the supply of alien hordes and there is certainly no escape. As a straight shoot-em-up it's not bad but lacks the real depth of games like Elite and Tau Ceti. The graphics are excellent but the sound effects aren't that hot particularly because you are given no audible indication that other ships are shooting at you. You'll blast away happily for a while but will soon find there is too little variety and depth.

Very impressive graphics and a rare treat for the unrepentant mega-blaster. There isn't much depth to the game, but sometimes that can be an advantage. Annoying, though, that there weren't more noises and spectacular explosions.

Nice vectors, shame about the gameplay - it's also, come to think of it, a shame about the weak sound, the poor instructions and the overall lack of variety. The task is limited, the combat uninspiring, the game as a whole badly lacking in imagination. Lovely vectors, though.

For once, here is a game with redefinable colours - surely the best solution to green screen visibility problems. Question is, why don't all games have this?

The task is limited, the combat uninspiring, the game as a whole badly lacking in imagination.