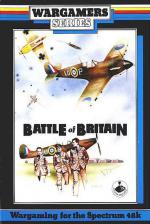 PSS has now produced a Spectrum version of its Wargamers Series Battle Of Britain game. It should be said at once that it isn't very good, and certainly not the best Battle Of Britain game on the market. Many of the Wargamers Series work on the same basic program routine - the "enemy" forces approach from one corner of the map moving towards the other, the player (there is no two-player option) responds by cycling through options and moving forces rapidly with a joystick, and at the moment of contact the game goes into an arcade sequence. It works for some types of battle - it works very well for Bismarck - but it doesn't work at all for air combat over south-east England in 1940. The German forces attack anywhere from the Wash to Lands End, but the Fighter Command which opposes them has, unaccountably, lost 10 Group and so has no fighters stationed west of Portsmouth.

Interceptions are far too easy to make, and so in order to make the game harder two very unrealistic features have been introduced. The first is that after one interception a squadron is considered "out of ammunition" and must land to replenish, the second is that airbases and sector stations are arbitarily put out of action by being "fogbound" at all hours of the day, although this fog can clear again in an hour.

The arcade sequence gives the view from a Spitfire cockpit in attacking enemy formations.

This game is one more proof, I'm afraid, that you can't take a good computer program (and it is good, make no mistake) and turn it into every battle there ever was.

The arcade sequence gives the view from a Spitfire cockpit in attacking enemy formations.