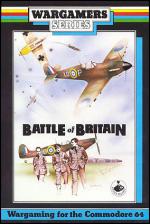 Some forty five years after one of the greatest aerial campaigns ever fought took place, a British company has produced a simulation for Commodore users in the shape of Battle of Britain. The game is a strategic wargame with optional arcade sequences for those who would desire them. One day scenarios or thirty day campaigns can be played. Packaged in PSS's standard 'bookcase' format, the game comes with a slick and concise manual in much the same format as Battle for Midway.

The game has a neat and colourful loading screen, depicting a group of pilots posed in front of a Spitfire. After loading, you are sent directly to the main menu screen and the five options. You can decide to omit the arcade sequences in favour of a pure wargame, then start the training, blitzkrieg or campaign games.

The training game is recommended in the instruction book for those new to the game. Training is a one-day scenario with little in the way of serious opposition from the Luftwaffe. At the end of the game, you are rated in terms of leadership ability by a percentage. Blitzkrieg is a similar one-day scenario, with the exception of the Luftwaffe laying it on like there's no tomorrow. The campaign game option sends you on to another menu. This includes Load/Save Day options, Start/Continue campaign, a game speed utility and an option to return to the main menu.

It should be noted that (for playability?) PSS reduced the actual number of campaign days from 54 to 30 and increased the number of casualties inflicted by attacks and bombing raids. A single day's play can last some time, so this compression serves to make the whole affair manageable.

Starting a scenario reveals a map of Great Britain (well, England and Wales, actually). On the map are cities, airfields and radar stations. At the top of the screen there are several windows to indicate current losses for both sides, the time and dale, description of whatever is covered by the cursor, and a unit status box (activated when an allied unit is directly under your control).

Once the game has started, it is only a matter of time before the first German units enter the skies over the Channel (and it doesn't take them long to reach your shores). You can move your cursor over an airfield and press the fire button to reveal what units are there and if any of them are ready for combat. The units displayed are either squadrons of Spitfires or Hurricanes and can be selected by an arrow situated next to the unit description. Pressing the joystick button scrambles that unit and returns you to the map. A moment later, an RAF roundel is displayed to represent the now airborne squadron. The cursor can now be used for one of two things. Just moving it over the roundel displays information in the status box, and pressing the fire button allows you to give the unit flight orders. Interception of an enemy unit and ensuing combat are both automatic, given a degree of proximity, working much in the same manner as ZOC (Zone of Control, for the uninitiated) rules.

If you have switched off the arcade sequences, the result of combat is handled by the computer. Otherwise a 'Select Battle' message appears at the top of the screen, which you have to respond to very quickly or the computer assumes you will allow automatic results. You enter the arcade sequence with a view from your cockpit (there are differences between the two types of Allied aircraft used). In the distance is the formation of enemy aircraft, and they soon become aware of your presence and start to split up. The fire button provides you with firepower and it is simply a question of anticipating the enemy pilots' movements and blasting them out of the sky (well, that's the theory). In fact, if you fly on a particular heading for more than a few seconds, you will undoubtedly discover an enemy aircraft in your mirror, and rapid evasive action is necessary to avoid being shot down. Assuming you have set the arcade sequences to 'on' but you wish to bypass some of them, hitting the space bar suffices.

Previously, I have reviewed PSS's Battle for Midway for a different machine and criticised it for making the player joystick dependent and thereby reducing the mental skill level required to complete the game. No such criticism would be valid here, however. PSS have handled the idea of 'switchable' arcade sequences very well indeed. In fact, because I knew that a 'true' wargame could easily be selected, there were occasions when I left the action sequences in, just for the fun of it. Incidentally, the graphics in these sequences are very good indeed and I wonder whether PSS aren't using the talent their programmers obviously possess as wisely as they could. But such things are not for discussion here.

The German bombers try and go for the airfields, cities and radar stations, with differing effects. If airfields are attacked, the first you're likely to know of this is when some of your planes try landing on a cratered runway, taking a few casualties. If, as a result of repealed attacks, an airfield becomes wholly un-operational, you will have no choice but to divert forces elsewhere. If radar stations are knocked out, you will discover attacks later, when the enemy is nearer to your shores. Pressing 'R' gives you a radar map in bright colours. However, if any stations are destroyed, gaps become noticeable in the map. These are your blind areas.

Whilst being the least effective against your operations, strikes against cities severely damages morale and, as a consequence, your leadership ability at the end of the game. So have no illusions about poor bomber protection being a 'cheap' way of winning the game. When the Luftwaffe are attacking any ground-based target, the battle selection places you in control of an antiaircraft weapon and leaves the rest to you.

The campaign game is the most advanced part of Battle of Britain. This can be made more or less difficult by use of the Speed function in the campaign menu. The main difference between this scenario and the others, however, is the re-supply phase. At the end of each day, new aircraft and pilots can be used to re-equip depleted squadrons. Realistically, pilots go from excellent to worse as the Campaign progresses. This adds considerable depth to the game, and by the time you get to the campaign stage, you will welcome the addition to the rules.

PSS have every right to be proud of this game; it approaches excellence. I feel that it does lack some details that could have improved it. The use of counter-intelligence and the construction of mock airfields would have added atmosphere and authenticity. As far as it goes, Battle of Britain is very good indeed, and I would recommend it to any wargamer. While PSS make arcade sequences optional, they should find their games gaining support from those incapable of doing anything (!) constructive with a joystick (like myself). What are you waiting for? Go and get it.

Graphics 70%
Very good on both strategic and arcade screens.

Authenticity 69%
Some points changed for playability but essentially accurate.

Playability 78%
Instantly playable as a result of excellent game design.

Value For Money 80%
Takes some time to conquer anything above the training game.

Overall 84%
A very good product indeed. Perhaps the training game was a little too easy, but otherwise superb.

A very good product indeed... Devoid of ambiguities, and instantly playable as a result of excellent game design.