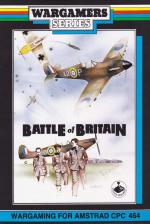 This latest in the PSS wargamers series is the recreation of that famous battle in the skies above south-east England during the second world war. It pits you as the beleaguered commander of Britain's RAF bases against the full force of the Luftwaffe. The game features a mix of arcade and strategy action to give you both a general's and a pilot's eye view of things.

Once you've chosen which game to play a map of England and Wales appears on screen with nine air bases, 13 radar stations and 15 towns/cities marked on it. All of these are potential targets for the Luftwaffe and have to be defended by the 18 squadrons of Spitfires and Hurricans at your disposal. These are dotted around the airfields but the same squadrons are always in the same place. Also on the map is a white cursor which is what you control everything with and use to find out information about particular sites.

The action starts when Luftwaffe squadrons appear on the map, detected by your radar, which also reveals the size of the formation. Firstly, the fighter squadrons have to be scrambled and then guided on the map to the target. They appear as little red, white and blue symbols which once set on course will proceed automatically to the destination you set them. If a squadron encounters the enemy then a battle results.

Here you can either take part in an arcade sequence or leave the computer to work out the conclusion of the fight. If you opt for a blast then the view will switch to a forward one from a Spitfire cockpit. In front of you will be a formation of fighters. You choose which formation to go after and then home in on one single plane as it looms large in your view. You have limited ammunition and time to centre as many planes in your sights as possible and riddle them with bullets so that they curve away trailing smoke as they head for the ground.

At the end of the battle, you will be out of ammunition and probably low on fuel as well so that the squadron will need to return to an airfield to resupply. If the attack was successful, the enemy formation may be depleted enough to have to turn for home; otherwise, it will keep heading for its target. If a squadron does run out of fuel, it will be lost to you for that day but not the whole campaign if you play the long game.

If the enemy get through to one of the three types of target then different results will occur If they attack a city then no damage will immediately be apparent but the bombed citizens will not take kindly to it and the final command ability score will be affected. If a radar station is attacked it may be put out of action and a gap will appear in the radar screen through which formations can slip unnoticed until they reach the coast.

If an airfield is attacked then another action screen can be played. This has you in control of an anti-aircraft gun as planes strafe and bomb the airfield with you trying to bring them out of the sky. The enemy will probably succeed in cratering the runway or making the airfield completely unusable. This means squadrons may take losses on landing or be unable to land at all and have to be diverted to other airfields. The weather can also close airfields with fog-preventing take-offs or landings.

At the end of the day you're told how many losses each side suffered and your command ability. In the campaign game this is accompanied by your averaged overall ability over the campaign and followed by a resupply section where pilots and planes are allocated to squadrons depleted in the fighting.

The combination of wargaming and arcade action is very compelling and even if you don't like strategy games you'll find the arcade sequences quite slick. For hardened wargamers the arcade sequences may not appeal, but I found them excellent and they can always be skipped.

N. Little historical detail in instructions.
N. Occasional lulls in the battle can be boring as you wait for them to pass.

As unregenerate shoot-'em-upper I really enjyed the dogfight sequences. A few rounds of Browning fire and another Messerachmitt bites the dust. Or possibly a Junkers 88. The strategy element is up to PSS's usual high standards, which means an engrossing game that will last just about as long as you've got time for. Time to scramble again.

The map and arcade sequences really give great atmosphere in this battle of wits.