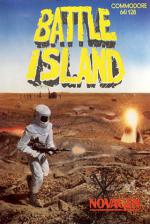 A funny thing happened to you on the way to the alien Neutron Beam Weapons Base. Your 'surprise' attack from the sea wasn't, basically, and only you escaped death or capture. You were the only one to grab a raft and inflate it with your Swiss Army footpump in time.

Being a heroic but stupid soldier, you resolve to take out the Neutron Beam Weapon on your own, and save your captured buddies from becoming alien goulash. With an M16 and a bag of smart grenades, not even thoughts of thousands of alien commandos, tanks, laser emplacements and certain death can hamper your enthusiasm for the fight.

After padding through shark-infested custard, sorry, waters, you land on the island to hunt down eight pieces of Bailey Bridge which will help you reach the weapons base.

Extra weaponry stars give you double shots, rear shots, unstoppabullets or a shield.

What's this? Novagen producing an ancient-looking Commando variant? So what if there are 350 memory-resident screens full of obstacles? They almost all look the same!

The bland graphics and sound stir no real feelings of excitement in my joystick hand, that's for sure, and this just wouldn't be the sort of game that I'd be playing for weeks on end in 1988. Or even 1987 for that matter! Come on Novagen, stick to the 3D greats we all love you for!

This certainly isn't the sort of game I was expecting from Novagen, and it certainly proves that they should have stuck to producing the 3D blockbusters they know best.

The cassette inlay boasts that the game is a 'graphics extravaganza', when the sprites and backdrops look like they've come through a time warp from 1985.

The music and sound effects are equally unimpressive. The game is just an unexciting Commando variant and even the extra weapons don't add anything to the thrill of destruction.

At ten quid I would think seriously before buying it, even if it does have Paul Woakes' name stamped on it.

Hookability 55%
The look of a souped-up Commando game provides some attraction.

Overall 41%
Certainly not up to the standards we've come to expect from Novagen.

An overall shoddy appearance and some unexciting action give the game a very short-term appeal.