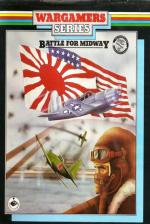 PSS have recently scored a remarkable success with a wargame on the C64 called Theatre Europe, so I had high hopes of Battle For Midway, their first outing (as far as I know) into wargames on the Spectrum. It's always good to welcome newcomers to the market, especially when they show every sign of moving in permanently.

Midway breaks new ground in packaging, and looks very impressive; it comes in a large ring-binder, with the cassette held in a plastic sleeve inside. This, I feel sure, will come in handy for keeping note-cards and file-cards in, if you're that sort of person, not to mention correspondence with the bank, etc. Perhaps next time, chaps, if you could make it a little bit bigger I could get all my Access bills in it. . . Well, you may have guessed that what I'm trying to say here is that I don't know what the price of this game is, but the pack makes it look like a ten quid job, while the game definitely is not.

It's not as bad as the 'Great Space Waste' for example, but it definitely does not live up to the promise of the pack. There are a couple of maps and a bit of blurb on the pack which attempts to elevate the mystique of the game still further; very nice maps, mind you, of Admiral Yamamoto' s Operational Plan, but bearing virtually no significance or relation to the game. Furthermore, apparently Midway was commended in the strategy games section of the 'Golden Joystick Awards' which are voted by the readers of Computer & Video Games. I'll leave the readers of Crash to vote on that one (as I value my free lunches).

The game itself is fairly straightforward there are three American groups (two naval and one from the Midway air base) and three Japanese (all naval). Each American group has aircraft (carrier-launched at sea) while the Japanese have four carriers, but all in one group. Your objective is to destroy the four Jap carriers (you play the Yankees) (no racial bias here).

You have two search aircraft (based at Midway Island) which you use to locate and track the Jap forces. In the easy game, the courses of the Japanese groups are actually marked for you, so finding them is a piece of cake: but even in the hard game finding them is not overly difficult, as you can only play on one screen, and there is no scrolling. Once you have located the enemy you must launch air attacks against them. Each group has effectively three flights of aircraft which can be launched and the real-time element of the game means that you have to wait a minute or two between aircraft launches. Once airborne, the attack groups are directed to the enemy by a cursor you select the target position, and they move there in their own time. Aircraft run out of fuel after a while, so if you don't remember to land them, they will crash. And that is more or less all the strategy there is in the game: locate the enemy, launch aircraft, blast enemy, land aircraft.

It is certainly far less complex than some other games of a similar type, e.g. Air Defence by CCS which I reviewed a couple of issues back. Of course, what Midway has that other strategy games do not is 'arcade' sequences which are referred to as a 'Real Time Air Attacks' in the booklet. These occur whenever you attack the Japs or vice versa, and what you see is the relevant naval task force laid out before you, and a horde of gnatlike aircraft zooming around above them. You man an anti-aircraft gun and can shoot them. This applies to your own planes as well as the Japs', which I suppose may appeal to some arcade freaks, but which is totally irrelevant to the rest of the game, and irritating in the extreme.

These suicide shoot em up bits are reminiscent of Beach- Head, but not as well done; it really does seem to me that, in order to appeal to a wider audience, a vast amount of wargame has been jettisoned to make way for an arcade section which is petty and pointless. There is no indication on the cover of these 'Real Time Air Attacks' and no screen shots to show what these sections are like this might create a little disappointment with the punters, methinks.

And I have another gripe about Midway it's very difficult to play on a black and white TV, as the status of the game is indicated by the colour of the cursor, which is difficult to determine. Now I know that in these affluent days of economic growth, full employment etc, everyone except me has a colour N for their computer, but I still believe in designing for the lowest common denominator. So just as, for example, I criticised a game I reviewed last issue because it needed two Spectrums with Interface 1s to be fully playable, so I also think that software designers should bear in mind that their games might be played in mono. Or perhaps put a sticker on the front saying "Colour TV Required".

In other aspects the game is up to current standards; the cursor is easy to use, the real-time element works well, information can be accessed about the various fleets and squadrons. But what it comes down to is that there is not enough of a game here. With only two seaborne groups, nine air attack units and two air search units, there are just not enough units under your control to allow for much in the way of thoughtful campaigning.

With only two seaborne groups, nine air attack units and two air search units, there are just not enough units under your control to allow for much in the way of thoughtful campaigning.