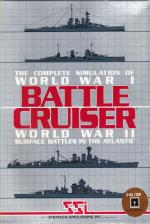 This is a difficult game for me to review. Because of the great complexity of the rules, I have to admit that, in the short time that I've had to play-test it, it hasn't been easy to get a comprehensive idea of how the system feels to play - although the rulebook gives an immediate understanding of the theory behind it. Getting the most from the gameplay is a matter of co-ordinating the uncompromising and unimaginative on-screen appearance with the material in the rulebook (which might more accurately be described as a source book) and the realisation quickly sets in that this is a long-term project.

Battle Cruiser comes with the expected lavish packaging of an American import, which is reminiscent of a boxed scenario pack for a role-playing game; the disk itself is inconspicuously hidden in a corner of the box underneath the glossy, full-sized 29 page rule book.

This is a standard of presentation hitherto unknown to me, coming wide-eyes from the homespun realms of Spectrum wargames, and the amount of material in the book promises the kind of complexity and thoroughness that only disk-based software can hope to offer. The game's subtitle - "The Complete Simulation of World War I and World War II Surface Battles in the Atlantic" - seems mildly ambitious, but when you realise that the disk is double-sided, and that 14 full pages of the rulebook are given over to ship specification, the potential soon becomes apparent. Even a short examination of the permutations available on loading makes it clear that the range of historical or custom-built scenarios available is enormous.

World War I is contained in its naval entirety on one side of the disk, and WWII on the other. The first screen allows the player to tailor a set of fundamental options such as the number of players (you can even watch the computer playing with itself if you wish; something I've never seen offered by a wargame before!), handicap level for non-historical scenarios, and the speed at which system messages are displayed.

An important choice offered is whether to play an historical scenario (of which there are four offered for each war) or to build your own.

Initially, building your own scenario is recommended. If you choose to, further options screens offer you the chance to fight on the open sea or to design your own landmass to play around; you can also specify the time and date of the conflict down to the minute, with the year chosen affecting the availability of ships. There is also a chance to introduce further handicap levels by deciding who has air/sea control of the battle area, who is best at damage control, and what the visibility level is. There are five different types of action offered, four game lengths, and a selection (in one case) of 53 different ships. Ploughing through these options before play is even in sight gives a confused first-time player a bewildering glimpse of infinity. Fortunately, the choices are methodically set out and explained in the rulebook, and only a player eager to get at the action would be confused. I suspect that this group includes most people who load a piece of software for the first time, but detailed reference to the rulebook is an essential practice at every stage in this game.

Eventually the game reaches the deployment phase which opens all player-designated scenarios, and which offers another chance to meddle with the variables. Ships can be auto-selected by the computer for both sides, or by the player from a pool of 'ship selection points' allocated to reflect the size and type of battle. In the deployment phase, the player can freely alter the bearing, speed and characteristics of each ship, can change their division numbers, and can even rename them according to his own fantasy.

Renaming ships is very useful if you have opted for the quick cop-out of letting the computer auto-select your forces, because it will probably serve you up with four Acastas and five Renowns and you may subsequently have difficulty in keeping track of individual ships.

The anticipation raised by the long series of option screens is very much dissipated by the first sight of action. The player is confronted by a blank screen with a pale square in the middle of it, and a crowded menu of options at the bottom. The game is driven by a number of these menus, which are called up when appropriate and, again, are fully and methodically explained in the rules; the gameplay's visual presentation, which occurs very much in terms of statistics, could kindly be called minimalist and more honestly uninspiring, even weedy.

Ships are shown as indistinct shapes which just about hint at their type (and more or less indicate in which direction the vessel is pointing), though when both sides go into battle it's impossible to tell at a glance which are your own. Each class of ship is, however, illustrated in reasonable detail in the reference guide except where we are told, grandly, that 'historical reference is not available'.

Imaginative input on the part of the player is required to get any pleasure from watching the game. This distinctly shoddy appearance, particularly when contrasted with the superior presentation of the rules, makes it look like Battle Cruiser is deliberately refusing to have anything to do with the cosmetics of computer game design.

An austere utilitarian approach is all very business-like, especially when the important aspects of the game are so well worked out, but computer software has in theory the potential to be genuinely attractive; and as far as wargames go, the computer has to compete with the considerable aesthetic appeal of the boxed game and painted lead figures.

Play proceeds in a fast, free mixture of order giving and order execution. Through a system of menus, movement and combat instructions can be given to ships individually or en masse by divisions. The orders are then executed in real-time during the action phase, which indefinitely extends itself unless the player requests another order phase.

If anything interesting happens during the action phase, the player is informed by messages which may flash by very rapidly or very slowly depending on which message speed was selected. To change the fleet's orders in response to these messages, the player presses a key to exit the action phase at the next opportunity - the response is not instantaneous, as the game seems to want to finish what it's doing first.

This is a free-form system which releases the gameplay from the artificial rigidity of fixed-length turns, and gives the player a good degree of control. A save game option is automatically given before each orders phase.

Prior to combat, the player's fleet has to find the enemy ships. The map, which allows movement in all the compass directions by means of an extremely irritating cursor system, is not enormous in real terms and the enemy will probably be sighted within the first turn. As with movement, orders for combat can be given to entire divisions; and if an individual ship is set against one of the enemy, a 'target' order automatically starts the firing.

Whether or not your ship will hit, or do much damage if it does, is determined by a vast number of factors. During the orders phase, it's easy to access a table which shows the weaponry of each ship, and reference to the rulebook gives details about the range and merit of the equipment.

When combat is happening during the action phase, a hit to either to one of the player's or the enemy's ships is reported in specific terms of eight possible locations, damage to which gradually impairs the ship's own capacity. There are lists of equations in the rules which explain the probably accuracy of gunfire and the chance of penetration - using variables such as the speed of the target, the range and the specifications of the weapons.

I may not understand them, but I'm glad to see them; I feel that game mechanics ought to be explained in the rules, and Battle Cruiser does it in such exacting detail that one has the uneasy suspicion that the information ought to be useful, if only one were clever enough. Certainly the rules give the player the maximum possible chance of intelligently making use of the capabilities of each ship, even though in play it's easy just to target the first ship you spot and watch in fascination as hits to various parts of the anatomy are reported in quick succession. Hits are accompanied by a sound effect which is useful enough, but has no chance at all of generating the atmosphere the graphics deny.

Points are scored for sinking ships and driving them off the edge of the map. The number of points scored for ships lessens if the victorious side has air/sea control of the battlefield, so there is a price to be paid for favourable handicap conditions.

Battle Cruiser is an impressive concept, if nothing special as a piece of software; whether or not you will enjoy it depends very much on what you're looking for. The game in the computer seems almost a supplement to the rulebook, and it's clear that to get the best out of playing it, you will need to refer constantly to the fascinating charts, descriptions and details presented in the manual. For someone who is interested in the technical aspects of naval warfare, this seems to be as complete a model as one could possibly want (though I admit I know nothing about it).

Together with the right historical situations, the infinite choice of player-defined open sea combat and the option to custom-build maps, the potential variety of play is enormous and I rate sustaining interest as about as high a virtue as any game can have. It is usually a very difficult quality to judge for a review.

Presentation 80%
The impeccable and expensive packaging is slightly offset by the unevenly poor quality on-screen appearance.

Graphics 39%
Uninteresting is a kind description.

Rules 96%
So luxuriant, so faultless, that they're more important than the game itself...

Authenticity 95%
Comes close to justifying its claim to be a 'complete' simulation.

Playability 86%
Dry and puzzling to get into, but once there swift and well-designed.

Value For Money 80%
Extremely expensive, but when you've paid you've got the whole Allied and Axis navies and hours of play. It's a question of perceived values.

Overall 89%
Excellent for what it is, but very much a matter of taste.

Excellent for what it is, but very much a matter of taste.