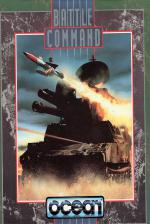 No doubt everyone is totally familiar with Battle Command, well those of you who are intelligent enough to be regular readers are, as this fabo metal muncher was previewed and actually given away as a playable demo in the Nov. Ish. And what a demo - but a good demo does not a good game make - or does it?

But just for the deadheads out there who missed out here's the low down again. You are in the driving seat of the Mauler tank, bashing its way through a 3D landscape blasting anything mean, green un-seen. The name of this game is destruction and no battle field veteran has been better equipped. Amongst the tanks devastating arsenal are SAM missiles, IR missiles, Radar air to surface/surface to air missiles, mortar, wire guided missiles, chaff flares to deflect incoming rockets that have locked on to your beast and other war toys either to be found or that come as standard. This is a game that anyone could get into. There are a variety of different missions including Hideout, where you have to search out and destroy a secret weapons base and Satellite, requiring the retrieval of a spy orb that has landed in enemy territory. Tactical play through out is essential and often it's better to run away and fight another day than stand and be bravely mangled. The 3D on the tanks is quite spectacular and hiding behind trees and mountains vital to survival. One final word of warning though don't get too good at Battle Command, you could find yourself drafted!

Real enjoyable romp through a war zone pilgrims. If war's ya bag give it a blast.

Real enjoyable romp through a war zone pilgrims. If war's your bag, give it a blast.