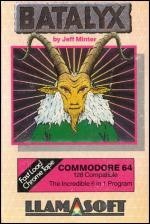 After four months of sheepless nights, Minter's latest megagame has appeared and, yes, ungulates feature strongly. In the blurb he says the concept came to him on an Athens bus, so who said there was no money in software these days?

What has the hairy one got in store for us now? Well, it's a compendium of six games which have been developed from several of his past favourites with a few new angles for added excitement.

The first 'subgame' is Hallucin-O-Bomblets, whose hero is more like a second generation Killdroid from Mama Llama than the pill-popping member of the IRA you might be expecting. This is a classic shoot-'em-up with the droid floating in space being beset by sixteen different types of alien. The game is fast and added complications are caused by the Newton effect: when a bullet is fired, your droid is propelled with an equal and opposite force. This means that you have to fire in the direction you don't want to go but do want to fire. If you don't follow what I'm saying, you'll have to play the game to understand.

Subgame 2 is AMC II, a jazzed (Should that be zarjazzed) up version of Attack Of The Mutant Camels for those who may have got the hump with its predecessor. As always, the rules are to blast the camels before they blast you.

Pink Floyd's album cover for Dark Side Of The Moon inspired the next game: The Activation of Irdids Base and the rules for the game are none too clear. Even Minter describes it as abstract, but zapping around the screen does create some nice sphere trails, and the 3D perspective is impressive.

Cippy On The Run marks the return of the Ancipital half-man, half-goat which Minter has been working on for several years now. Resembling Sheep In Space, the horned hero battles against grey spherical objects. Blasting his way from level to level, you must guide him towards the psychedelic bonus run screens which appear after two levels have been completed.

The final game is Synchro II which first appeared as a magazine listing but has since been worked on. The screen display shows textured squares which can be activated by the joystick to move their patterned surfaces at varying speeds. Balls appear which move about in a random fashion across the patchwork and it is the player's aim to match each ball's speed and direction by the speed and direction of the pattern on each square. This is extremely difficult but at least you can use the patterns to create musical effects if you give up on the game itself.

Instead of a pause feature, you get a dose of Psychedelia, so you can create soothing moving patterns to match your mood and calm your shattered nerves during a hectic playing session.

The games are linked by a time factor. Before commencing your odyssey around the subgames, you set your own time limit from the range available. This means you can spend anything from five minutes to an hour trying to reach your objective. Subgames can be tackled in any order but the later it is in your alloted timespan the harder the game becomes.

This package provides excellent value for the many Llamasoft fans who never seem to tire of Minter's games. The graphics are amazing and the variety makes it a hard beast to tackle.

This package provides excellent value for the many Llamasoft fans who never seem to tire of Minter's games. The graphics are amazing and the variety makes it a hard beast to tackle.