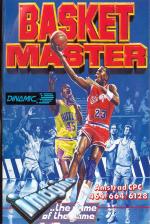 Dinamic are renowned for their flick screen shoot-'em-ups like Game Over and Freddy Hardest. This is a departure for them to a one-on-one basketball simulation. One or two players can take part.

There's a nice title screen with a guy spinning a ball on the tip of his finger and smiling the sort of smile that a crocodile would be proud of. There are three difficulty levels: beginner, amateur or NBA (National Basketball Association). Beginner is tough enough to keep most people on the losing side until you've had lots of practice.

The pitch is made up of two baskets at opposite ends with shooting zones by each of them. To win the game, all you have to do is score more points than your opponent. This is not as easy as it sounds because you also have to watch out that you don't inflict too many personal fouls.

When in possession of the ball you can either dribble, shoot or slam-dunk. A slam dunk is where you jump up close to the basket and literally push the ball into the net rather than throw from a distance. A successful slam-dunk is replayed in slow motion with a zoom in on the action.

When you haven't got the ball you can try to steal, intercept or cover the zone. Stealing takes the ball from your opponent, but you have to be quick or he'll take it back. Next to the foul meter is a space where a ball appears, if it's visible then you're in a position to steal the ball. Interceptions are when you catch the ball after your opponents had a shot at the basket and covering the zone forces your opponent to shoot from further out, where he will score less often.

At the bottom of the screen is a status area which shows energy, number of fouls, message area, score and timer. If you are low on energy then you can't perform slam dunks and your shots aren't as good. The score board shows how many points each player has scored. When the timer reaches zero the game ends and the player with the highest score wins.

Graphically this is what you'd expect from Dinamic; nice large characters and smooth animation. The slow motion action replays are delightful although they're rather chunky. A title tune plays, but there's no in-game tune. Sound effects are the bounce of the ball and the roar of the crowd when a basket is scored.

The computer opponent is very mean even on beginner level, and at NBA level you'll need to be very good. One thing that's silly is how easy it is to make the computer commit five fouls, this could well be the only way to win for many people and it's not much fun doing it that way. As a two player game, it's much more fun and should keep you occupied for longer.

This is the best attempt at a basketball simulation on the CPC's, but it still has some problems. Only having two players on court means it loses the passing element of the real game. This also means there's a lack of variety in the play. It's enjoyable for what it is - a one-on-one game with great graphics. The action replay looks superb, but that's no less than you would expect from the graphics masters at Dinamic.

Not a single problem in green.

Staying Power 63%
P. Not really a game that you complete, but one you'll come back to.
N. Only having two players on court restricts the game's potential.

Overall 65%
P. Best basketball game around.
N. But even then it doesn't get close to the real thing.

Although it's the best basketball game around, it doesn't get close to the real thing.