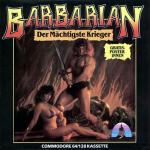 Designed by Steve Brown and written by Stanley Schembri (the duo behind Cauldron II) comes a beat-'n-hack-'n-chop-'em-up with bloddy and sweaty overtones.

The scenario is straight out of the myths of old, telling of Drax, an evil sorcerer, who's lusting after the voluptuous Princess Whittaker (and who can blame him?). Unless she's delivered to him, he will unleash his unspeakable wrath upon the people of the Jewelled City. However, this is one alternative - the Jewelled City must offer up a champion to defeat the evil sorcerer and his muscular henchmen.

Champion after champion is defeated and the Jewelled City is losing hope, when, from the forbidding wastelands of the north, comes an unknown barbarian willing to take on the awesome task. Who is this mysterious warrior?

Barbarian comes in two parts, loading in no particular order. The first is a combat practice routine for one or two players, designed to help you get to grips with the fighting moves and assess the strength of opponents. On the flip-side is a fight to the death, where the Princess' future is at stake and you eventually come face to face with Drax himself.

Sixteen moves are available: eight controlling body movements, accessed by simple joystick movement, and eight attacking moves that come into play when the Fire button is pressed. The jumps, twirls and rolls executed by the two combatants are complemented by truly macho swordplay, as the massive broadswords are brandished to devastating effect.

The hero has to fight his way through eight increasingly difficult levels, moving on to face a stronger, faster opponent each time a foe is vanquished.

On the final screen, you come face to face with the dark and mysterious Drax. He can't be bothered with lowly swordplay and launches into battle by hurling bolts of magic. Should you manage to avoid the magic and defeat Drax in a traditional physical assault, Princess Whittaker is saved and is likely to want to make a clean breast of things...

Muscles rippling, hair flying in the wind, my bronzed body glistening with sweat as I leap in for the kill - my adversary defeated, I raise my hand in acknowledgement and know that the comely maiden will soon be mine. Barbarian has turned me into a jumping and slashing he-man (with two-foot long hair to boot - paradise!).

The single player game is a touch unbalanced, with the first three opponents a little easy and the next few practically invincible - but the two player section is the most realistic and exciting slash-'em-up yet.

This is everything that Highlander could and should have been - there are a variety of convincing moves and tactics, perfectly complemented by the realistic sound effects. There's far more to Barbarian than the three acres of Maria Whittaker's flesh which adorn the packaging, so cut a path to your local software shop now!

Barbarian represents new heights in bloodsports: there's plenty of life-juice sloshing around, and the lopping-off of heads is sickeningly realistic.

The animation is probably as good as you're going to get on a C64, and the action is fast and very furious.

Despatching Drax's guardians provides a fair challenge, but I'm not too sure about the lastability.

There are relatively few backdrops, and the gameplay doesn't alter significantly from screen to screen. Someone is bound to moan about the game's violent aspects, but until then, go get your copy and do some serious slaying.

Yeah! All the thrills and spills of a nightmarish abattoir - blood spurts, decaptated heads flying around, guts and gore and hunchback cripples dragging away corpses - this is what I call a real hack-'em-up!

The computer opponents have a great degree of 'intelligence' and consequently the game is varied, challenging and unpredictable - something that's vital if a beat-'em-up is to be successful.

Once you've beaten Drax the second program's appeal might diminish, but the practice game is the sort of thing that gets played time and time again.

Sound 73%
Good combative effects - but where did they get that tune?

Value For Money 71%
A touch overpriced considering the limited gameplay.

The definitive man-to-man combat game. It excels mainly in the two player option.