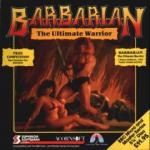 After the blaze of publicity that preceded this game's release with an expensive advertising campaign featuring two rather well-built and scantily clad models, I was really looking forward to a game full of excitement and action.

Sadly I was disappointed. It seems that Superior Software is suffering from a shortage of new ideas. This game is almost identical to Yie Ar Kung Fu, only this time the figure you control uses a sword instead of his hands to fight opponents.

In this one or two player game the scenario is a fight against the ten evil minions of the sorcerer Drax - and finally the sorcerer himself - in order to free the beautiful Princess Mariana. At first the opposition is easy to despatch but as they get more proficient the task gets harder.

From boot up you can select your preferred keys for both players or you can play the game with a joystick. From there you are presented with the choice of combat practice or starting the game itself: The Fight to the Death.

The former gives you the choice of a demonstration which shows the 16 different fighting moves you can make, or you can practice against a passive opponent. This may seem pointless - it did to me - but it was while I was busy hacking away at some poor, helpless chap that I discovered that it's possible to decapitate an opponent, which in turn leads to the most entertaining sequence in the whole game.

This involves a goblin-type creature which normally comes on at the left-hand side of the display once a combatant is dead, crosses the screen and exits at the right-hand side, dragging the body behind him. If there's been a decapitation the goblin collects the body as usual but casually punts the head off screen.

While still in combat practice mode you can opt for either one or two player modes. In the first you are pitted against a warrior who you must defeat in order to have the privilege of fighting another, slightly more proficient, one.

This goes on until either you defeat ten of them or, as is more likely, one of them beats you. A fight ends when one of the combatants has taken twelve hits or is decapitated. In the two-player mode you each control a warrior and fight against each other. The same victory conditions apply, but you also have the added pressure of having to complete the duel in 90 seconds.

Of all the modes these two seemed the most pointless to me. If you're going to practice fighting ten opponents, you might as well practise while playing the actual game. That way if you do, by some miracle, manage to defeat all of them, you can get to enter Superior's own Barbarian competition.

The Fight to the Death is almost exactly the same as the combat practice mode. Again you can watch a demonstration, fight a passive opponent or a second player. The only difference is that if you opt for the Fight to the Death in one-player mode, you get to fight the evil sorcerer Drax after defeating the ten Conan lookalikes.

Combat is punctuated by the sound of swords biting into flesh and the satisfying *thunk* as your warrior head-butts his opponent. These few sound effects can be turned off by pressing function key one. There is no signature tune, which some would say is a blessing, but I find Superior's tunes are better than most and it's unusual for them not to bother with one.

My biggest disappointment was with the graphics I've no grumble with the quality - which is excellent - but I was disappointed with the quantity. There seem to be only four screens, and the two arena ones featured on the packaging are the only ones I've come across in Fight to the Death mode.

You begin fighting in front of someone sitting on a throne. In the second bout, you face your opponent in front of Drax and the captive Mariana - who, by the way, bears no resemblance to the young lady featured on the packaging. Then it's back to the man on the throne again and so on.

The other two screens only appear in the combat practice mode. Again they alternate, this time featuring two wilderness scenes, the first in daylight and the second at night.

Another point is that your adversaries are exact clones of your warrior except that yours is wearing a white vest. Even so there have been a few times when I've smugly watched one of the warriors making mincemeat out of the other, congratulating myself on some nifty swordwork, only to realise that it's the bad guy who was doing the hitting!

I don't want to give the wrong impression about this game: If you are a fan of games which simulate physical combat martial arts and the like, you will find Barbarian an excellent addition to your collection. To its credit, Barbarian has little for me to criticise, except for the fact that I've seen it all before.

Barbarian has little for me to criticise, except for the fact that I've seen it all before.