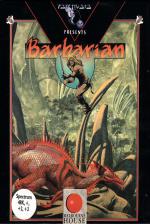 Barbarian was a big hit with ST and Amiga owners earlier this year, coming as it did from one of their fave labels, Psygnosis. And now Melbourne House (Mastertronic by any other name!) has bought up the 8-bit rights and knocked out some conversions. So far so bon, hein?

What were looking at here is another Rastan/Vixen/Athena scrolling slice-'em-up quest-to-find-the-lost-golden-pillowcase-of-Tharg, or something. You are Hegor the Barbarian, man of muscle and tiny brain, and while you've got your trusty sword, you're always in with a chance. The control system is unusual, but surprisingly easy to cope with, although I'd recommend keyboard over joystick.

Q and W control movement left and right, as normal, while O and P move the cursor along a row of icons at the bottom, which if activated, make Hegor do something more interesting than just wandering about. There's one for fight, for instance, another for moving quickly, one for going downstairs and so on. Fighting requires timing but is otherwise straightforward. More important is standing in the right place at the right time - timing things just right is the secret of survival.

The icons can cause problems, as the game deliberately doesn't explain what they mean. Some are obvious, others deeply obscure, and there are still one or two that I haven't worked out yet. Not that I've needed them as far as I can make out, so who knows? There are arrows tying around as well, but I get the feeling that this is one of those games in which finding out what's going on is up to you - "part of the fun", as the inlay usually says - so I shall say no more.

Once you've worked out the puzzle that each screen boils down to, Barbarian is quite easy, certainly to get into. I suspect that it's quite large, and so fairly tricky to complete, but there's a saminess in the graphics, no doubt caused by the Speccy's notorious limitations, that begins to pall after a while. Still, I do keep having just another go, usually between every sentence of this review. See, there was another one. My own feeling is that people who thought Karnov was an morceau de gateau will find this a dead cinch, but as I thought Karnov completely unplayable, I quite like this. I don't know about you, but I hate shelling out a tenner for a game that I can't get beyond the first screen on - this presents no such problems. Whether it has true lasting fun-potential, though, is another matter entirely.

Overall though, I was pleasantly surprised. The conversion is very professional and to be honest, rather better than Melbourne House's usual standard. My only real moan is that it's not amazingly fast. Hegor doesn't exactly rush about (unless you click him into Rush About Mode, upon which he whizzes all over the place, generally getting killed in the process). Control, though, is very user-friendly, as you can press movement buttons and icon buttons at the same time -and both actually work! Now I think there may just be time for one further game. How am I going to get past that accursed wizard ...?

Fairly easy slash 'em up based on the 16-bit hit, and nowt to do with Maria Whittaker! More addictive than it looks, too.

Fairly easy slash-'em-up based on the 16-bit hit, and nowt to do with Maria Whittaker! More addictive than it looks, too.